Note:  Following a tough loss to the Penguins, the Jets flew 45 minutes across the state to Philadelphia where they will prepare for tomorrow night’s game against the Flyers.  Today they will practice at the University of Pennsylvania at 11:00 AM.  As always we notify you via twitter @illegalcurve and Facebook when the site has been updated with the latest Jets news.

Note II:  Tune into NHL Mid-Week with Illegal Curve on TSN 1290 Winnipeg from 6 to 8 pm.  The guys will be chatting about last night’s loss to Pittsburgh, looking ahead to tomorrow’s game against Philadelphia as well as taking a look around the NHL.  Guests:  Michael Traikos (National Post) and Frank Seravalli (Philadelphia Daily News).

Winnipeg Free Press:  The push begins in earnest.  This isn’t simply a 3-1 lead in the 3rd period.  The Jets have a small cushion right now in terms of a playoff position but it will be a critical test of their mettle to see if they can maintain it with 30+ games remaining in the season.

Winnipeg Free Press:  New assignment sparks Thorburn.  He is riding a three goal in four game hot streak as he continues to reward the faith Paul Maurice shows in him.  Ed also writes about the Penguins (sans Crosby/Malkin), notable numbers, one on/one off and a Pens trade. 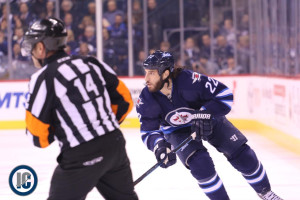 Winnipeg Free Press:  Rusty Jets spanked by Pens.  It was a 1st period to forget coming off the All-Star break.  That didn’t look like the same team that had rattled off five straight wins.

Winnipeg Sun:  Penalties cost Jets.  While coach Maurice often suggests that his team plays a physical, penalty inducing type of game he cannot be happy with the offensive and neutral zone infractions.  End of the day Penguins go two for three on the power play and that is the difference in the game.

Winnipeg Sun: Newly-formed Jets trio turning heads.  While some fans questioned the idea of Chris Thorburn on the 3rd line, he (1 goal, 1 assist) along with Evander Kane (3 assists) and Adam Lowry (1 goal, 1 assist) were the best line on the ice for the Jets in the loss.

Pittsburgh Tribune-Review:  Letang produces 5 assists in return as Penguins defeat Jets, 5-3.  Considering he was called a game time decision by his coach, I suspect folks in Pittsburgh are somewhat happy that he was inserted into the lineup.  Read full review of the game from a Penguins beat writer.

Winnipeg Sun:  What a difference a year makes for Winnipeg Jets.  Paul reflects on what it was like in Pittsburgh following a Jets loss under coach Noel and what this team looks like one year later.

TSN 1290 Winnipeg:  Hustler & Lawless (audio).  Hockey analyst Mike Milbury joins Hustler & Lawless live from Radio Row in Phoenix. Milbury, a Pats fan, sways fom the attention of football to discuss the new confidence in the Winnipeg Jets and what he’s seen from the Jets this season.

Illegal Curve:  Coach Paul Maurice post-game press conference (audio).  Assessment of the game.  Frustration with the goal scored against with 4.6 seconds to go in 2nd.  How much trouble did their centre drive cause the Jets?  Did he see the charging penalty?  His thoughts on it?  When it was going for them in the 2nd, what did he like?  Thoughts on the 3rd line.