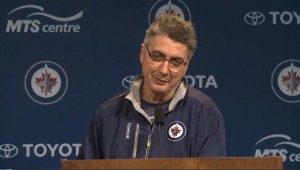 Coach Noel – Upbeat for a guy who has lost three straight.  Byfuglien talk; Is he trying to do too much?  Is there anything wrong with the system?  Why can’t they get consistency?  Does this team have an identity?  Does he feel like the team is closer to achieving this goal?  Thoughts on Tampa Bay.  Olympic talk.  Injury updates.

“We played too offensively in Pittsburgh”

“There is nothing wrong with the system…..When we play the right way in our system we play well, that’s what we are striving for on a consistent basis”

“I’ve been trying to find it for two years and three months or four months.  We’ll get it.”

“We are consistently inconsistent”. (In response to question about team identity).