The Jets weren’t on the ice prior to departing for Ottawa but we still caught up to a couple of the guys for comments in advance of their three game road trip. 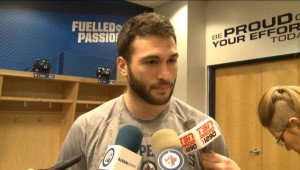 Mark Stuart –  What’s the feeling around the team?  Guarding against overconfidence.  Paying attention to what other teams are doing?  New commitment to team D.  Playing in front of Al vs. Ondrej.  Does it matter who the starting goalie is to the players?

Zach Bogosian –  Is there a change in the room?  Can they keep it going?  What would be a successful week for him?  Defence shutting it down, what has clicked?

Anthony Peluso –  Feeling around the team right now.  How does this surge compare to previous ones?  New team defensive effort?  Testing this team with trips to Ottawa, Boston and Pittsburgh.  Was he expecting the pass?