Prior to departing on a three game road trip coach Noel met with the media. 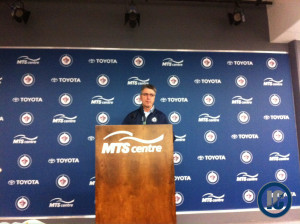 Coach Noel – Considering the week ahead.  Goaltending situation.  How does he decide which goalie to use in the back to back games?  Consistency talk, do they have it?  Does this surge feel different?  On John Scott being sent out for last faceoff.  Has he ever sent a message like that?

“Likely is he(Montoya) would be the guy, it would be hard not to”.

“…we’ve given up one goal in two games, that’s pretty good.  When I watch us we are becoming difficult to play against because of our skating, our work….”.

“Caught me off guard really, I wasn’t paying enough attention to that but might have been a good thing that I wasn’t paying attention to it.  You have to be careful as the league has sent out a directive to be cautious what you are doing in the last few minutes, they don’t want to see that stuff.  I think the referees handled it correctly.”

“..teams and players don’t forget however you want to send your message, they all recognize”.