The Jets have announced a new ECHL partnership for this season. 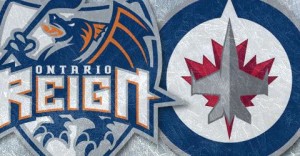 The Jets have announced a new ECHL partnership for this season.  This has to be the farthest distance between two affiliates.  As was tweeted at us, the distance between Ontario, California and St. John’s, Newfoundland is 7,058.9 km, although in terms of flight distance it is 5508 kilometers.

Here is the Jets press release:

True North Sports & Entertainment and the Winnipeg Jets Hockey Club, along with their American Hockey League affiliate the St. John’s IceCaps, are pleased to announce a new partnership with the Ontario Reign as their ECHL affiliate for the 2013-14 season.

“We are pleased to embark on our new partnership with the Ontario Reign,” said Craig Heisinger, Senior Vice President & Director of Hockey Operations/Assistant General Manager of the Winnipeg Jets. “Ontario is an organization that shares our level of commitment to success and we look forward to working together to provide our players’ opportunities to further develop themselves on and off the ice.”

Current Head Coach Jason Christie, joined the Reign in August 2011, as did current Assistant Coach Mark Hardy, formerly of the Los Angeles Kings. Christie played 88 games with the Manitoba Moose over two seasons (1996-97 & 1997-98) where he earned 43 points (16G, 27A) with the club. He also spent two seasons as an Assistant Coach with the Chicago Wolves, spending the 2008-09 season working under then General Manager Kevin Cheveldayoff.

“We’re very excited about adding the Winnipeg Jets organization as a Reign affiliate and believe it will help to further solidify us as a top contender for the Kelly Cup,” said Justin Kemp, President of the Ontario Reign. “They carry a deep roster of young talent that will be given a great opportunity to develop in a competitive and professional environment here in Ontario.”

Ontario Reign Press Release:  Jets to give Reign a lift.

One interesting thing to note from the Reign press release was this bit of news:

The Los Angeles Kings will remain the Reign’s primary affiliate; the Jets will be Ontario’s secondary affiliate with this new partnership.