Note II:  Tune into the Illegal Curve Hockey Show on TSN Radio 1290 today from noon to 3 pm as the guys spend the show previewing the 3rd round of the Stanley Cup playoffs which begin today.  Guests:  Craig Button (TSN), Mike Colligan (The Hockey Writers).

Chicago Sun-Times:  Corey Crawford in control after losing spot in 2010.

Jets official site:  2013 Draft combine – GM Kevin Cheveldayoff (video).  Jets GM discusses the process that his team undertook as they met with 88 prospects at the combine.

Jets official site:  2013 Draft combine – Marcel Comeau (video)  Listen to what the Director of Amateur Scouting had to say from the combine in Toronto. 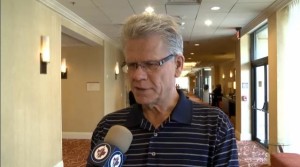 Minneapolis Star-Tribune:  Antti Raanta’s decision is made.  According to Michael Russo the Jets are one of three teams in the running for the highly touted Finnish goaltending prospect.

Winnipeg Free Press:  Tix for Jets’ draft party on sale soon.  For those of you unable to be in New Jersey, you can support your Jets at the draft party the team is hosting.