Next opponent news – Montreal Canadiens: The team’s best players need to step up. Sorry if we upset people.

TSN:  Jets among NHL’s best at home and worst on road.  Easy to explain away the early season road record.  The big test will be January.  If this team can win 4-7 games on the road it will be in very good position come the February and March push.

Winnipeg Free Press:  Little closer to rejoining Jets lineup.  Great news for the team as he has been one of the most important pieces to the puzzle for the Jets. 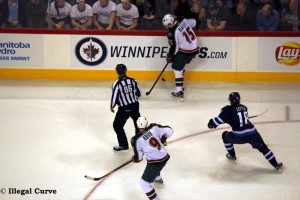 Winnipeg Sun:  Fehr needs to play better.  You can see that Fehr is still not 100% but is trying hard to work through it.  Perhaps his coach is trying to give him some motivation via the media.

Montreal Gazette:  The team’s best players need to step up.  The team isn’t likely to make a change at coach again this season, which means the only way this ship will start sailing again is if the players step things up.

ESPN:  Sorry if we upset people.  Does anyone outside of Quebec actually care?