Jets next opponent news – Washington Capitals: Should Alex Ovechkin get more time on the powerplay? More drama for the Capitals. Will Semin answer wakeup call? Do you like the tougher version of Boudreau? Alex Ovechkin on Alexander Semin.

Winnipeg Free Press:  Hainsey returns to lineup.  The Jets are starting to get healthy and having the veteran defenceman back in the lineup should be a boon for the Jets. 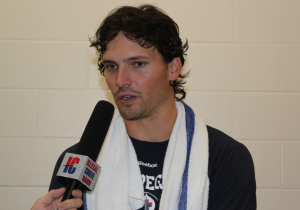 Winnipeg Sun:  Hainsey in for Jets.  Looks like he will be replacing Kulda, who has played steady during his call-up from the IceCaps.

TSN:  Jets try to extend win streak against Caps.  Tonight is a chance to do some damage against a division rival.  This would be a HUGE game to win although many of you (30%) who have answered our poll question (when will Jets winning streak end?) suspect that tonight will be the night.

CSN Washington:  Caps keep an eye on Kane.  Will we see a repeat of his last performance against the Capitals?  The Jets have to be hoping they do.

Washington Post:  Should Alex Ovechkin get more time on the powerplay?  Recent guest on the Illegal Curve Radio Show Neil Greenberg makes the argument that #8 should be out on the PP more than he is currently being used.

Globe and Mail:  More drama for the Capitals.  That is why coach Boudreau is well respected.  Because he doesn’t change the rules for players.

CSN Washington:  Will Semin answer wakeup call?  I suspect we will see a different player tonight than we saw last Thursday at the MTS Centre.

CSN Washington:  Do you like the tougher version of Boudreau?  Coach Boudreau has to know that this season expectation are much different than they have been in the past.  It isn’t enough to finish high in the conference and win a round or two.  Stanley Cup Finals and a championship are the expectations.

Washington Post:  Alex Ovechkin on Alexander Semin.  Hopefully Ovechkin had a few other choice words for his friend in russian that will inspire the talented Russian winger.

What type of player are Jets looking to add before the deadline? Who is Canada's best chance at a Stanley Cup? Jets update with John Shannon.

Tears, dedication and hope: How Jets’ Josh Morrissey got to NHL All-Star Game. Keeping up with the NHL’s Central Division (Top four).