Winnipeg Free Press:  Struggling Jets hope to put together rare win streak.  The Jets haven’t managed to do either of coach Noel’s requirements but they will try and start to bolster the home record with a win over the Caps tomorrow night.

Winnipeg Free Press:  Jets’ Fehr edges closer to return.  He sure looked good snapping those wrist shots in yesterday’s skills competition.  He looked good with the other Jets players on the ice last night. 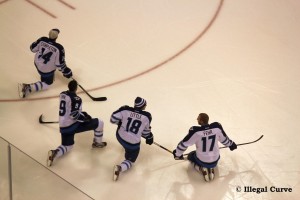 Winnipeg Sun:  Winkler’s Fehr set for Jets debut.  His slapshot registered at 93 mph so hopefully his shoulders aren’t giving him any problems.

ChrisD:   How to properly yell “Go Jets Go”.  Only in a hockey crazy market do fans need pointers on how to properly chant for their team.

Washington Times:  Given new chance with Jets, Eric Fehr bothered by same old problem.  The Jets will be very thankful when they get the lanky Manitoban into the lineup.

CSN Washington:  Eakin thankful for trip home.  The Winnipeg native seems thankful for the position he has earned with the Capitals and doesn’t sound like he is going to take a shift off.

Washington Post:  Catching up with former Capitals winger Eric Fehr.  Never easy to face off against your old team.  Sounds like Fehr will be hosting some of the Caps when they arrive in Wpg later this evening.

Washington Post:  Third period proving costly.  If you are facing a team like the Capitals, you need to exploit any weakness you can.