Relocation Talk: Return of the Whalers? Howard Baldwin thinks he can make it happen (again).

CBC:  Jets licence plates set for takeoff.  If you have any questions about the particulars be sure to read the FAQ that MPI and the Jets put out.

ESPN:  Blossoming Big Buff.  Scott Burnside and Craig Custance discuss the turnaround in the Byfuglien’s game.  He did it all last night.  Scored, hit and even tried to mediate fights. 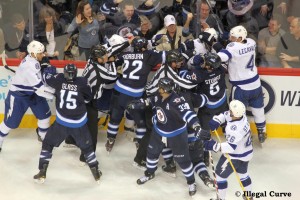 Winnipeg Sun:  Second Jets Gear store launches in St. Vital.  Expect this to be as busy (if not busier) than the Jets store at the arena.

Miner & News:  Local author shares Winnipeg hockey history beyond the Jets.  While many consider the AVCO championships the WHA Jets won to be ancient history, we must not forget that the city has a rich hockey history dating back to the Stanley Cup championship days in the early 1900’s.

NBC Sports:  Return of the Whalers?  Howard Baldwin thinks he can make it happen (again).  Loved those green Whalers jerseys but I don’t see it happening for a bit.  Quebec City is seen as first in line (once they get a building) while KC is also up there as they have a state of the art arena (Sprint Center).

Washington Post:  Tomas Vokoun to start against Predators.  Just some notes on the Caps from the team beat writers before they take on the Preds.