CTV:  Jets licence plates expected to be unveiled Tuesday.  Will you be buying one given the chance?

Winnipeg Free Press:  Jets coach tinkers with lines.  With the Jets anemic offence, it was time to do something and we at IC love that the GST line has been reunited.  Perhaps fans will see more of this at the MTS Centre following coach Noel’s moves. 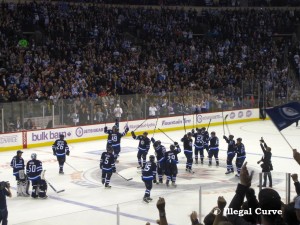 Winnipeg Sun:  Jets look to snap losing streak against Lightning.  As it currently stands in the IC poll, about 72% of our readers think the Jets are going to end the losing skid tonight against the Bolts.

The Telegram:  Mannino makes his case in IceCaps crease competition.  Two of the three goalies down in St. John’s are really making it tough for coach McCambridge to decide on who is going to be his #1 netminder.

Winnipeg Free Press:  Lightning looking to duplicate home record.  Sounds like the Bolts are standing behind their 1-3-1 defensive scheme.  Will they use it tonight?  Stay tuned to @illegalcurve to find out.

Montreal Gazette:  Lemaire defends Lightning coach Boucher’s system.  Not surprised a defensive coach like Lemaire would defend the system.  I was a bit surprised he took a shot at guys who used to coach and are now television hockey analysts.

Faceoff:   Closing the trap.  The pylons sound off on whether or not the NHL outlaw Guy Boucher’s Tampa Trap?