TSN:  Jets prepare to face Capitals at MTS Centre.  Looks like the Jets will be going with the same lineup that brought them success against the Bolts.  Only possible exception is Jim Slater, who is a game time decision. 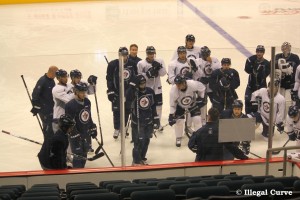 Winnipeg Sun:  Can Jets hold off Alexander The Great?  If they are going to, they will need Ondrej Pavelec, making his 11th consecutive start, to be lights out.

Winnipeg Free Press:  Jets stay focused with Ovechkin in town.  The Jets will have to neutralize Ovie and continue to take the play to a very talented Caps team.

Washington Post:  Capitals hope they’ve learned from defensive miscues.  Are we set to see another high scoring game, similar to what we saw when the Jets played the Flyers?

Washington Post:  Fond memories of Winnipeg for Capitals goalie.  Much like the Moose, the Bears are one of the top run AHL franchises and they have the players on the NHL’s Capitals to prove it.

CSN Washington:  Caps-Jets production meeting.  A preview of some of the things you can expect to see if you watch the Caps broadcast.