Why the Jets are off to a shaky start. Mason didn’t join Jets on ice in Tampa. Tickets to Jets skills competition on sale now. Tough times in Philly. AHL News: King off to another solid start. Aaron Gagnon clears waivers, will join IceCaps.

Sportsnet:  Why the Jets are off to a shaky start.  Whenever you have to trade a major asset and other GM’s smell blood in the water it isn’t ever a good thing.  This season is going to be one of acclimatization and that goes for the players as well as the coach.

Winnipeg Free Press:  Mason out, MacLean placed on waivers.  The Jets backup has played pretty well so far this season, so let’s hope whatever is ailing him, isn’t too significant.  If he isn’t able to go it is widely suspected that Peter Mannino will get called up.  We spoke with him back in September and here is that interview. 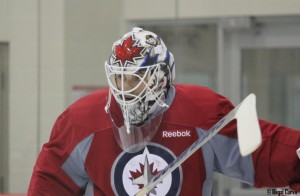 Winnipeg Sun:  Tickets to Jets skills competition on sale now.  Since the Jets 1.0 never had one of these (that I can recall) that the public was able to attend, I’m sure fans will find it interesting to see who the fastest skater, the most accurate shooter, and who has the hardest shot.  If I had to guess in advance I would suggest that Evander Kane is the fastest skater, Alexander Burmistrov will be most accurate and Bogosian has the hardest shot.  Let us know who you think would win in each of these categories!

TSN:  Tough times in Philly.  Doesn’t look like the Jets have too many big hitters.  Surprised Mark Stuart or Dustin Byfuglien isn’t on the list.

Western Star:  King off to another solid start.  As are the IceCaps who sit in a five-way tie for 1st overall in the AHL.

The Ice Flow:  Aaron Gagnon clears waivers, will join IceCaps.  Coach Noel said in reference to Gagnon when asked at by the media last week that Gagnon would have to begin down in the AHL and it appears he is ready to start on the road to joining the Jets.