Pavelec to start for Jets against Flyers. Kane denies he wants out of Winnipeg. Jagr and Pavelec both from the same town in Czech Republic. Kane nixes trade rumours. Flyers’ Schenn out 4-6 weeks with broken foot.

TSN:  Pavelec to start for Jets against Flyers.  While there were questions from the media as to whether or not coach Noel would go with the Jets #1 goalie, it appears he will be getting the start tonight in Philly.

Globe and Mail:  Kane denies he wants out of Winnipeg.  Hopefully he can put the rumours to rest with some strong play on the ice.  More interesting that the Kane speculation is what Paul discusses towards the end of the article.  The match-up of Pavelec and Jagr, both from the small town of Kladno, Czech Republic and whether Jagr knows the secret to success against the Jets netminder. 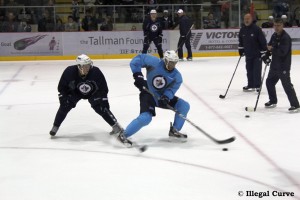 Winnipeg Free Press:  Kane nixes trade rumours.  When Jeffrey Duppal (Kane’s business manager) @ tweeted Darren Millard with an ominous sounding tweet (i.e. to direct message him on Twitter and he would provide details on the subject) it made this nothing rumour blow up a bit.

TSN:  Flyers’ Schenn out 4-6 weeks with broken foot.  As if losing Chris Pronger wasn’t bad enough, another bad injury is going to cost the Flyers this young forward.  The Flyers have recalled forward Zac Rinaldo and defenceman Erik Gustafsson from the AHL.