Winnipeg Free Press:  Winnipeg Jets looking to move away from the past and form new identity.  It isn’t so much about forgetting the past (they are after all named the Jets), nor is it about ignoring the interim (as the Moose) but about combining these two era’s and forging ahead with a new identity. 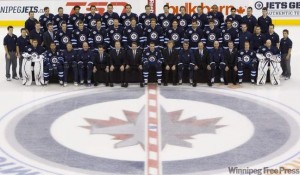 CBC:  Jets players, staff treasuring the moment.  The game means a different thing to each and every person and tomorrow, regardless of where you are taking in the action, be sure to enjoy each and every moment.

Globe and Mail:  Jets owner drops in at practice.  While he might not live in Winnipeg, he has demonstrated that he has this provinces best interests at heart.

CBC:  From equipment manager to Jets executive.  It is emblematic of the type of individual Assistant GM Craig Heisigner is, that he doesn’t understand why his story is so significant.

Winnipeg Sun:  Jets’ Thorburn pulled over, wished good luck.  At least he wasn’t speeding and given a pass.

Globe and Mail:  Noel cautiously optimistic of Jets playoff chances.  Better to say then ‘I expect us to finish 13th’.  This team does seem to have a wide margin, anywhere from 7th-13th in the East.

ESPN:  Hockey gets second chance in Winnipeg.  And this time it will be back for good.  The fans who lost the team, combined with the new breed of NHL fans will ensure that they won’t repeat the same mistakes (apathy) and will ensure the team is here for years to come.

New York Times: Giddy Winnipeg reclaims its lost prairie companion.  What shouldn’t be lost, is the significance that Winnipeg is being written about in the New York Times again.  While there are 1000’s of other accomplishments (arts and science) that our city has to be proud of, the role this hockey team has being an ambassador of name recognition shouldn’t be understated.

Winnipeg Free Press:  Police beefing up downtown security.  They city of Winnipeg should plan to have a heavy police presence for all 41 Jets home games.  If we want people to be downtown they need to feel safe, and that shouldn’t be any different at 2pm on a Thursday or 10:30 pm following a Jets Saturday night game.