Winnipeg Free Press:  Canadian Tire offers Jets tickets in contest.  Between 11 and 3 pm all contestants have to do to win tickets to the home opener is log on and explain why you are “Winnipeg’s biggest hockey fan.”

Winnipeg Free Press:  Jets happy to be underdogs.  There is something about this Jets team that make you want to believe that they can overcome their limitations to finish in the top 8 of the Eastern Conference this season.

Montreal Gazette:  Hope Montreal Canadiens lose on Sunday.  A Montreal based journalist hoping that the Canadiens lose.  Never thought I would see that happen.

CTV:  Couple getting married Sunday makes adjustment for the game.  Smart move by them, otherwise they would have a lot of unhappy guests and a ton of people checking their Iphones and Blackberry’s for constant updates.

Yahoo Sports:  The Winnipeg Jets and the great logo cash grab.  The amount of Winnipeg Jets gear still available is unbelievable throughout the city so don’t expect the supplies to run out too soon.  If the Jets are pulling a Disney move of putting the old logo in the vault and then releasing a new “special edition” later on some fans might object but eventually they will buy whatever True North is selling.

NHL.com:  Winnipeg Face-Off party starts memorable weekend.  This city is the place to be and you can expect the partying to last all weekend long. 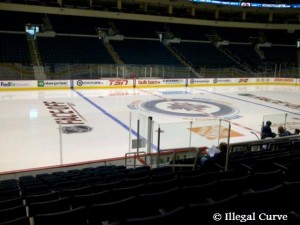 CTV:  Latest version of EA ’12 offers tweaks, Winnipeg Jets.  Looks like my post the other day was right (Jets officially haven’t had a team in a video game since 1996).

Toronto Star:  Winnipeg rises.  The amount of development finally going on downtown is absolutely necessary for this city.