Note: Tune into the Illegal Curve Hockey Show on TSN Radio 1290 on Saturday as the guys discuss all the latest Winnipeg Jets and NHL news.  Take note that the show starts at 8 am until 11 am as a result of the Jets game beginning at 2 pm.  Guests:  Aaron Portzline (Columbus Dispatch) and Anthony San Fillipo (Flyers Inside Out).

Winnipeg Free Press:  A ‘miracle’ Redmond back on ice: doctors.  He went from life threatening condition, to recuperation to coming to see his team mates to skating with the injured Jets players.  Quite a remarkable young man. 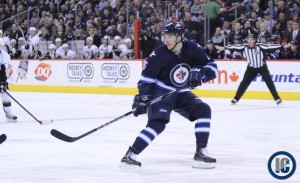 Winnipeg Sun:  Alex Burmistrov relieved he’s staying put.  He has been much better of late.  He seems to get a lot of attention because it appears some are looking for the faults.

TSN:  Lack of offence continues to be major issue with Jets.  While some have been blaming Pavelec the losing skid is directly attributable to a lack of scoring.  It is really that simple.

Illegal Curve:  Winnipeg Jets coach Claude Noel scrum from MTS IcePlex.  With his team on a five game slide, coach Noel held an optional practice at the IcePlex today and met with the media following same.

Illegal Curve:  Market Research Survey to gauge potential interest in WHL franchise in Winnipeg.  It seems like fans in Winnipeg really like the idea of WHL hockey in this city.  Answer our poll question now.