A new contract for the Jets Swedish prospect.

This news is a few days old but with all the attention on the big club in Winnipeg some of the moves surrounding their prospects are being lost in the shuffle. 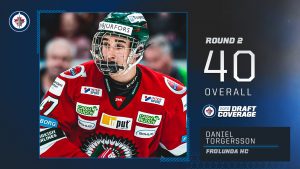 Case in point involves Jets 2020 2nd rounder Daniel Torgersson who was selected by Winnipeg back in October at the virtual draft. He was playing with Frölunda in Sweden however an injury has derailed his year limiting him to just two games with the A-team.  However the injury didn’t stop Frölunda from signing the prospect to a two-year contract which will extend him to the summer of 2023.

Prior to the start of training camp in Winnipeg, Jets GM Kevin Cheveldayoff was asked for an update on Torgersson and said this:

“Torgersson, he got hurt early, very early in his season over there and had to have some surgery. I believe he’s on the recovery process and hopefully when things resume more normally that he’ll be back.”.

In the Release by Frölunda we learned (via google translate) that it was knee surgery for Torgersson who had this to say about signing a new deal with the A-team in Sweden:

“Fun, and something you strived for. It’s the locker room you want to sit in”

And added this about his injury and recovery

“Yes, it’s sour, but I have received good support and have kept up the heat. I have just had to go on ice and expect to be back fully next season. If it is earlier, it is a bonus”.

Here is what Frölunda’s sports director Fredrik Sjöström had to say about the Jets prospect:

“Daniel has had a difficult season due to the injury, but we still believe in him. He is a big, strong and skating-skilled guy with a great future that we want to invest in,”.

Which gives you plenty of reasons to be paying attention to the Swedish Hockey League or you can just check out our Overseas Prospect Reports (another of which is coming out later today).