Check out the Jets prospects that will be in Winnipeg this week for Development Camp. 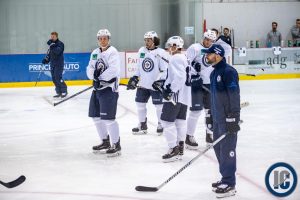 Last week the Jets revealed the schedule for next week’s Development Camp but hadn’t released the names of their prospects and invitees who would be in attendance.  With the NHL Entry Draft concluded in Vancouver and with five new players in the Winnipeg prospect pool the team has now released the names of those who will be attending this week including:

Four of the five players the Jets drafted this weekend will be in attendance according to their release with just Swedish defenceman Simon Lundmark, who they selected in the 2nd round, not listed.  As per the Jets 23 of the 41 players at the camp were drafted by Winnipeg.