The NHL schedule was released today and Jets fans get a chance to check it out. 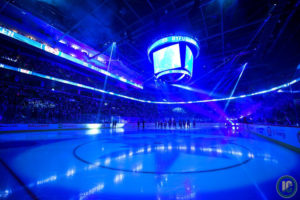 We already knew three of the Jets regular season games for the upcoming 2019-20 season and now we know the remaining 79 games as the NHL has now released the full 82 game schedule.

Jets fans may be circling February 11th as that is when the city will see the return of Jacob Trouba and Brendan Lemieux to Winnipeg.

The Winnipeg Jets Hockey Club, in conjunction with the National Hockey League, today released its 82-game schedule for the 2019-20 NHL regular season.

The Jets open the season with four straight games on the road, starting on Thursday, Oct. 3 against the New York Rangers. The Jets play their first game at Bell MTS Place against the Minnesota Wild on Thursday, Oct. 10. Winnipeg travels to Regina, Sask. for the 2019 Tim Hortons NHL Heritage Classic on Oct. 26 versus the Calgary Flames.

The longest homestand of the season spans six games from Feb. 8-18. Winnipeg also plays six consecutive home games from Oct. 13-26, but that half-dozen games ends with the NHL Heritage Classic. The Jets’ longest road trips of the season are only four games long, including the season-opening trip in New York, New Jersey, and Pittsburgh.

February is the busiest month, with the Jets playing 15 games in 29 days. Winnipeg plays 10 back-to-backs this season. Seven of the back-to-backs feature a pair of road games and two are consecutive games at Bell MTS Place. This is the fourth season in a row which features the five-day player break during the season. The Jets have five days off following the 2020 NHL All-Star Game in St. Louis, Mo. on Jan. 24-25.

The Jets take on their Central Division rivals – Chicago Blackhawks, Colorado Avalanche, Dallas Stars, Minnesota Wild, Nashville Predators and St. Louis Blues – a total of 26 times with half of those matchups coming at Bell MTS Place. The Jets play the remainder of the Western Conference from the Pacific Division – Anaheim Ducks, Arizona Coyotes, Calgary Flames, Edmonton Oilers, Los Angeles Kings, San Jose Sharks, Vancouver Canucks, and Vegas Golden Knights – a total of 24 times with 12 of those games coming at home. The Jets also host and visit all 16 teams in the Eastern Conference once throughout the 2019-20 season.

Start times indicated on the attached schedule are in central time. Times may vary depending on broadcast requirements. Television broadcast schedules will be released shortly. Once again this season, all 82 games are being broadcast on the radio on TSN 1290. 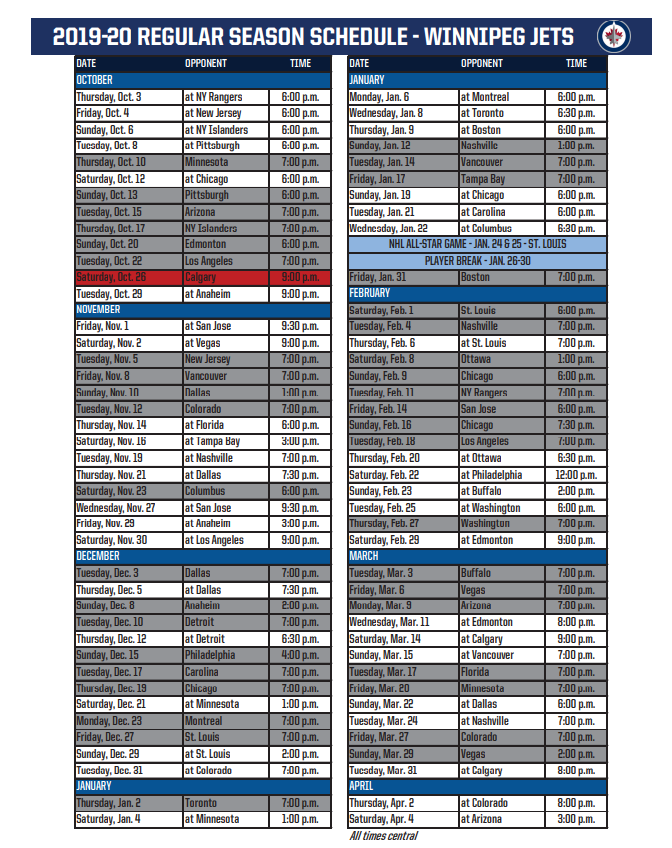