Check out the lines & D pairs as well as hear from Jets following day 18 of training camp. 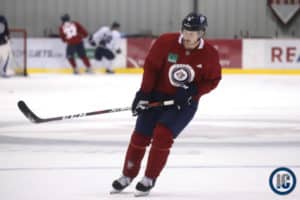 Ahead of today’s practice at the IcePlex the Jets announced they had re-assigned Michael Spacek to the Manitoba Moose which brought their camp roster down to 26 players.

Via Scott Billeck the lines and D pairs are as follows:

Also worth noting that 2017 1st round pick Kristian Vesalainen has switched his number from 42 to 93.

Coach Maurice:  Status of Joe Morrow.  Quicker pace to skate.  Is he planning on keeping Vesalainen, Lemieux and Dano to start the season?  Does he want to start the season with two extra forwards?  Does he like Ben Chiarot’s camp?  On the different type of pressure the team will face this season because of last season’s success.  What makes a bunch of good players a good team?  On the Jets areas of growth.  On the need for defensive ‘buy in’.  On the pressure Bryan Little has placed on himself.  On Little playing with another pro in Perreault.  Will this team look the same style wise as they did last year?  On smaller players who are playing in the league who may not have played previously.  Playing two division rivals on the road, is that a good thing?