Note:  The Jets got their roster down to 27 players after they re-assigned Michael Spacek to the Moose on Monday.  They are scheduled to practice today at the IcePlex at 11 am and you can get completely caught up with everything that happened yesterday during training camp.

The Hockey News:  Another weapon in Winnipeg’s arsenal – Jack Roslovic.  (Paywall).  A deep dive into the 2015 1st rounder.

Winnipeg Sun: Decision day for Jets hopefuls.  Suspect it was a sleepless night for a few of the players on the bubble last night as the Jets brass gets ready to make the decisions they need to get the roster down to 23.

Winnipeg Sun:  Gang back together, for real.  A very similar group is back in business for this season and they are expecting similar success as they build on what they did well last season.

Winnipeg Free Press:  Veteran Jets centre feeling pressure to produce on second line.  (Paywall).  Bryan Little has put a lot of pressure on himself to find some chemistry with his linemates. 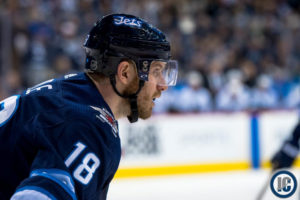 TSN: Heightened expectations not deterring Jets from main focus.  Coming off a deep run in the Stanley Cup playoffs, the Jets are aware that they won’t be catching anyone by surprise this season and internally, they have high expectations for themselves.

Sportsnet: Jets are ‘best team in Canada’. With Patrik Laine and Connor Hellebuyck anchoring the Winnipeg Jets, they’re expected to be Canada’s best shot at winning the Stanley Cup.

Winnipeg Free Press: Appleby taking long road to the NHL. (Paywall).  Missed this one from the other day as Mike caught up with the netminder who is looking to break through.