A look at the Jets training camp on day 15. 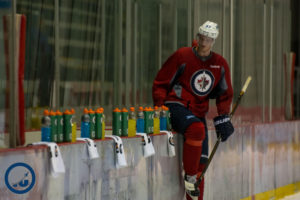 The Jets were back on the ice for day 15 of training camp today.  A look at the lines comes to us via Brian Munz of TSN 1290 Winnipeg:

Mathieu Perreault:  On playing with Laine.  Does he adjust his game to get a shooter the puck.  On getting the Finns more vocal.  Feeling good physically?  Mentality change in last pre-season game?

Ondrej Pavelec:  Does it feel any different this training camp?  Is it hard to be friends with teammates that you are competing with?  Is he starting tomorrow?  Excited for final tune up of regular season?  Is the last exhibition lineup close to opening night roster?

Paul Postma:  How does he feel about his game?  Speed of game and getting adjusted.  On the changes to the power play.  How different is the mentality getting ready for the final pre-season game?

Marko Dano:  His assessment of his training camp.  Does he feel like he’s in a battle for a roster spot?  Can nerves be a problem at this time of year?  Does he think about it much?

Topics:  How close was today’s lineup to what he will use in game against Wild.  Players approached last night’s game like a regular season game.  On changing the team identity.  Is he comfortable with starting the season with three or four rookies?  What does he hope to see from Perreault with Laine and Armia?