A recap of the Moose game.

The Moose renewed acquaintances with the Iowa Wild in a rematch of Saturday night’s affair, where the Wild came away with a 4-2 victory. With Eric Comrie under the weather, Ondrej Pavelec got the start – his 4th start in the past 5 games. After winning the the gold model for the US at the World Juniors on Thursday night, Jack Roslovic was given the game off and will meet the team for Tuesday’s game in Tucson. 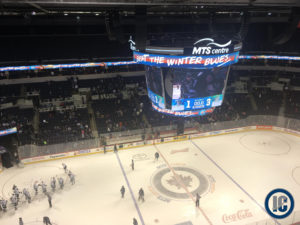 Manitoba Goal (1): After a bloodied J.C Lipon drew a high-sticking double-minor, the Moose powerplay went to work – Brenden Kichton moved the puck over to Kyle Connor, who fed it down low to Chase De Leo, who immediately threw it cross-crease to Dan DeSalvo, who buried into the top-half of the net. A beautiful tic-tac-toe play.


Iowa Goal (1): While up a man, Brenden Kichton tried to enter the zone and gave the puck away, and Christoph Baertschy beat Chase De Leo to the puck, cut in, and beat Pavelec five-hole to tie things up.


Iowa Goal (2): After a Moose giveaway, Jan Kostalek got beat on the back-check and the Wild came in 2-on-1, with Teemu Pulkkinen feeding a nice pass over to Pat Cannone, who beat Pavelec to the left post.

Iowa Goal (3): Christoph Baertschy scores his second of the game into an empty net.

F Chase De Leo – He made the key play on the game’s first goal – a nice touch pass to Dan DeSalvo who was sitting alone back-door. He also skated with a ton of speed today, and made several other subtle, but smart plays which helped create chances for the home side.

F Brandon Tanev – He made a few notable plays, including creating a short-handed breakaway, where he tried to go five-hole but was denied on the backhand deke. He also had several nice rushes where he burst into the zone and helped the Moose maintain control in the offensive zone, which resulted in a few decent chances.

F Kyle Connor – Connor’s highlights tonight included a secondary assist on the DeSalvo goal, and a nice nice zone entry and pass over to Jimmy Lodge in the slot (Lodge wasn’t able to cash in from a prime spot.) He is playing fairly well, but I think coaches, management, and fans alike are expecting domination. Stay tuned.

F Brendan Lemieux – He had a good chance early, hitting the post a very quick release from the left slot; he was quiet the rest of the game until the final minute, where he made a really nice rush which was eventually snuffed out.

F Jimmy Lodge – Like several other players listed above, he made one or two nice plays  today, an Ehlers-style dangle behind his back to get away from a defender, followed by a nice saucer pass across the ice which created a nice chance for Peter Stoykewych.

D Nelson Nogier – The rookie defender continues to show inconsistency, yet is progressing. He stood out in good ways, including a few nice rushes up the ice, and some crisp passing, though he also made a few bad giveaways. While he needs to pick his spots better, and cut down on mistakes, the good news is that he’s gaining the confidence to make plays.

D Brenden Kichton – The only true PP quarterback on this squad, Kichton makes does the little things well in the offensive zone, like holding the puck in the zone, walking the line smoothly, and surveying the ice, as he did today, moving the puck to DeSalvo on his left, Connor on his right, or floating shots through the slot. He helped generate the only goal of  the game, but he also turned the puck over, which helped Iowa tie things up – perhaps the turning point of the game.

Player Note: F Dan DeSalvo scored his 9th of the year – tops on the Moose – and is tied for 2nd in points with Chase De Leo. He was also named second star of the game. The Moose are very lucky to have him as a 2nd line centre, especially given that he started the year in the ECHL.