Moose get doubled up by the Wild 4-2 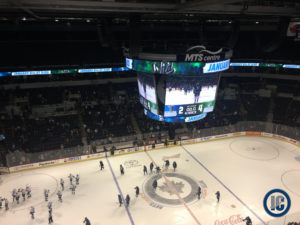 The big news prior to puck drop was that the Moose had signed a backup goalie for tonight’s game as Eric Comrie, it turns out, was unavailable due to illness.  So during warm up Manitoba players had some fun with 45 year old rookie Greg Husson.

The game itself was an interesting affair.  The Wild peppered Ondrej Pavelec with 18 shots in the 1st period but were only able to beat him once when he was screened by his defenceman early in that period.  The Moose responded when JC Lipon parked himself in front of the net and chipped a puck up and over Wild goalie Steve Michalek.

In the middle frame the Moose took the lead when hometown product Peter Stoykewych blasted a shot from above the circle past a screened Wild tender to give Manitoba a 2-1 lead.  About five minutes later this was erased as Manitoba began to take penalty after penalty.  While Iowa didn’t score on the man advantage it killed the momentum for the home side.

In the 3rd period the Wild managed to beat Ondrej Pavelec with a long shot from inside the Manitoba blue line ruining a fairly solid 35 save performance from the veteran netminder.