A chat with 2012 7th round pick Jamie Phillips. 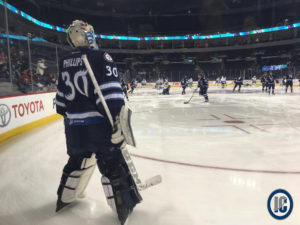 Yesterday, the Moose had Greg Husson as their backup and today we saw Jets prospect Jamie Phillips who was called up from Tulsa of the ECHL.  The Jets 7th round pick in 2012 started off red-hot in his first professional season with the Oilers going 10-0 and has been solid posting a 18-10 record and a .914 save percentage and a 2.61 goals against average.  He was named as the starting goalie for the ECHL All-Star game which is January 18th in Glenn Falls, New York.

With Eric Comrie still sick Phillips had the opportunity to backup Ondrej Pavelec in the net as the Moose took on the Wild in a Sunday matinee.  While he didn’t get into the game for Manitoba (a 3-1 loss to Iowa) we had a chance to catch up with him about the call up to the AHL as well as his season in the ECHL.