Who Will Drop the Gloves for the Winnipeg Jets?

Regardless of your opinions on fighting in hockey, it remains a part of the game. No other sport allows players to stop the game, drop the gloves and fight. If something of that nature happened in any other major sport, fines and suspensions would be handed out.

Two men going toe to toe, will always draw cheers and excitement from the crowd. In this article I will be examining which current Winnipeg Jets will be lifting fans to their feet with their fists this upcoming season. 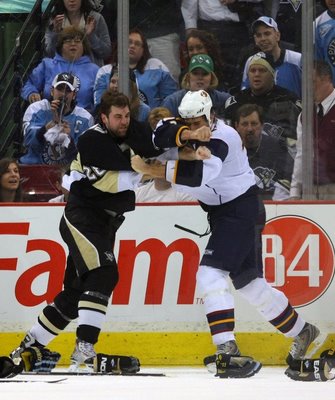 As a team, last year’s Thrashers did not fight much. Their collective 33 fights was good enough for 19th in the league. In fact, Atlanta did not even have half the number of fights that the #1 St. Louis Blues had at 78. But they did have more than double the last place Detroit Red Wings (13).

Read more about the Winnipeg Jets scrappers after the jump.

The table below includes the fighting statistics (courtesy of hockeyfights.com) for the current Winnipeg Jets from last season. Fight% indicates the percentage of games fought in.

It appears that GM Kevin Cheveldayoff was aware that he was losing some toughness in Boulton, and replaced him with former Manitoba Moose/Vancouver Canuck Tanner Glass. Weighing in at 205 lbs, his ten fights last season for Vancouver, would have been tops on the Thrashers squad. It is worth noting that the 6’1” Glass had 15 fights in the 2009-10 season (in 67 games, a 22.39%),

Notable names that Glass went head to head with were Jamal Mayers (twice), B.J. Crombeen and JF Jacques. According to hockey fights readers, his voted record was 2-3-5. While mostly drawing, one fight he did win against Matt Martin of the New York Islanders, was his highest rated of the year (video below). Glass fought in 13.70% of his games, which is actually below his career average of 17.93%. If Glass is able to suit up for a full 82 next season, he could surpass last year’s fight totals.

The next player on the Winnipeg Jets’ most likely to drop the gloves is defenseman Mark Stuart. Listed at 6’2”, 212 lbs, the Rochester, MN native was acquired in a trade with Boston that also sent Blake Wheeler to Atlanta. Stuart had been throwing down in Boston for 3 years until raising his game last season. He set a career high in fights with 7, compared to his previous high of 6 in 2009-10.

Last season he took down league pests Daniel Carcillo and Sean Avery on his way a 3-1-3 record (as voted by HockeyFights.com readers). While he won more than he lost, Stuart’s fights don’t rank very high with HockeyFights.com readers, as his highest rated fight was a 5.6 in a loss to Cody McCormick. However, the 27 year old is entering his fighting prime; the only thing holding him back is games played. He suited up for 54 and 56 games the last two seasons, if he can get into 82 with the Jets, he should be able to surpass last season’s total.

Chris Thorburn has been fighting for the Thrashers during 4 out of his 6 NHL seasons. Hailing from Sault St. Marie, Ontario the 6’3” 210 lbs forward has finished second on the team in fights to Eric Boulton for 4 consecutive seasons. Thorburns’ 7 fights last season, show he may be picking his spots more as he has had seasons with 12, 10, 9, and 9 fights. Last season he went up against tough guys such as George “the moustache” Parros, Manitoba’s Arron Asham (3 fights), and Stanley Cup hero Mike Rupp.

Thorburn’s record last season, as voted by the readers of hockeyfights.com was 4-1-2. The highest rated fight was against Travis Moen of the Canadiens scored a 6.2 (watch below). During this fight he showed he can punch equally well with both hands. His fighting percentage went down last year, it is possible we are seeing Thorburn’s last days as a brawler.

Other notable fights for the Thrashers last season

-5’11” Bryan Little had his first career NHL fight, he stayed within his weight class (195lbs) and dropped the gloves with former teammate Marc Savard (5’10” 175lbs)

-Evander Kane matched his rookie total of 2 fights, his most notable career fight was in his rookie season when he took down league goon Matt Cooke, see below for your viewing pleasure.

-Ben Maxwell’s one fight in 12 games last season gave him a fighting percentage of 8.33%. It appears that this is a product of small sample size. The 6’0” 180lbs forward is not particularly big and fought Winnipeg’s Colin Wilson who is not a known fighter. I don’t think he’ll be stepping into Glass/Stuart/Thorburn territory any time soon.

For your reading pleasure I have compiled the career fighting statistics of the current Winnipeg Jets’ players who have had at least one career fight. As expected, Tanner Glass, Chris Thorburn and Mark Stuart are at the top of the list.

-Zach Bogosian had 3 fights in each of his first two NHL seasons, Jets fans should want to see his number at around 1. Coach Noel would prefer to see his young defenseman on the ice rather than risking a broken hand or having him in the penalty box.

-In 2008-09 Dustin Byfuglien had 5 of his 7 career fights. When in Chicago, Dustin Byfuglien was more of a depth player playing behind top scorers Toews, Kane and Sharp. Winnipeg would prefer to have last years 2nd leading point-getter on the ice, than in the sin bin.