Note:  Remember tonight is the first night in the Illegal Curve Summer Radio schedule from 6-8 pm cst on Sports Radio 1290.

Winnipeg Free Press:  Glad to have Ladd.  With all the high praise Ladd is receiving it feels like we’ve signed Steven Stamkos.

Globe and Mail:  Jets send message with captain Ladd signing.  Sounds like just the type of ‘high character’ guy this team needs to lead it into the future.  Let’s hope we will see him in one of these types of photos wearing a Jets jersey before this contract is up. 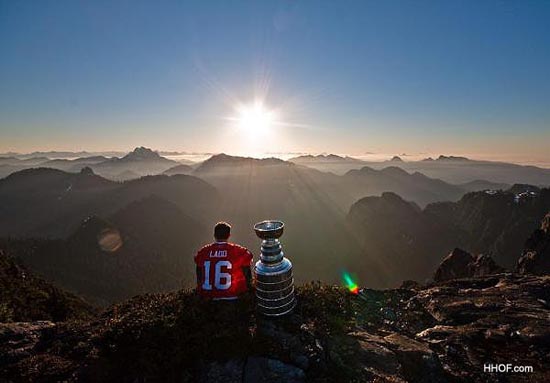 Winnipeg Free Press:  We get the leader our team needs.  Normally I wouldn’t agree that he left money on the table as I thought the Jets still over payed slightly to sign him, but in this age of inflated contacts, perhaps they did get a bargain.

North Shore News:  Jets make Yuen part of a select few.  If Mark Seidel (Chief Scout for North American Central Scouting) was right, Yuen was the steal of the draft.

The Telegram:  St. John’s will play in division with New England teams.  A benefit in terms of travel for the new team in Atlantic Canada.

Winnipeg Sun:  Captain Ladd finds a home.  This is why I’m happy we signed him long term.  Good egg.

Toronto Sun:  Bogosian building block.  For all those worried here are GM Kevin Cheveldayoff’s own words when it comes to the young blueliner;

“For our organization, I hope he’s someone who’s going to be here for a long, long time.”

More Jets news and articles from around the NHL including Buffalo news and Kaberle’s deal with the Canes after the jump.

Winnipeg Sun:  Wheeler on road toward deal with Jets.  Not that shocking that he filed for arbitration.  Expect both sides to be working on getting a deal done.

CBC:  Ladd signing another vital day in Jets rebirth.  Not afraid to sign long term.  That’s my kind of RFA.

Buffalo News:  Ennis likes Sabres’ prospect.  Buffalo looks to be the team to watch this season.

TSN:  Kaberle inks three-year, $12.75 million deal with Hurricanes.  What a deal for him.  Leaves the Leafs, wins a cup and rewarded with decent contract from the Canes.

Edmonton Journal:  Oilers No.94 thrilled to be back home.  Captain Canada is back where he belongs.

CBC:  22 players file for salary arbitration.  Looks like the Rangers have some work to do.