More on Connor and Laine. 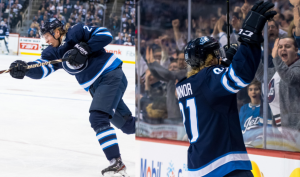 Just two days after the opening TSN Insider Trading segment the Jets are back in focus with the panel talking about Patrik Laine and Kyke Connor once again.  Earlier today Pierre LeBrun was on Leafs Lunch to say that nothing was imminent with the two Jets RFAs.

And this is what LeBrun and fellow insider Bob McKenzie had to say about the Jets two RFAs this evening on TSN:

LeBrun: I will say this. There have been discussions this week. Both between Patrik Laine and his camp and the Winnipeg Jets, and Mikko Rantanen and his camp and the Colorado Avalanche. So that is the positive. The negative is they haven’t closed the gap just yet. I believe the Jets recently offered a two-year deal, yes, a two-year bridge deal at around $6 million a year. My sense is that the Laine camp led by Mike Liut would rather be north of $7 million a year on a two-year bridge. So, still a gap right there.

McKenzie: And Kyle Connor continues his discussion with the Winnipeg Jets. Right now, they are probably looking at a six-year term. That’s suitable for both sides, but they’ve obviously not been able to agree on the money just yet. As of right now, not close is the word with negotiations between Kyle Connor and the Winnipeg Jets.

You can read more here and watch the full segment here.