Note:  The Jets trimmed their roster down to 32 players on Wednesday as they try to streamline the number of players on the ice at training camp.   Today the Jets play their final home game of the pre-season when they welcome Connor McDavid and the Edmonton Oilers to town.  No morning skate but media availability at 9:30 so be sure to check back for our pre-game report with the projected lines, D pairs and pre-game audio.  Puck drop is at 7 pm and will be followed with our usual post-game coverage.

Note II:  What would a day be like without some RFA talk?  Yesterday on Leafs Lunch Pierre LeBrun indicated that nothing was imminent and confirmed what has been out there for awhile that a potential Laine deal is likely a bridge while a potential Connor deal is likely a long-term one.  After that was TSN Insider Trading where Lebrun spoke further about Laine and Bob McKenzie spoke about Connor.

Note III:  The Winnipeg Ice had an exciting announcement on Wednesday as they announced that Mitch Peacock has been made the play by play voice for the junior club.  As someone who has had the pleasure being in the broadcast booth with Mitch I can attest to his professionalism and the fact that he will make an excellent addition to their club.

TSN: Recent RFA winger signings won’t bolster Patrik Laine’s case. Travis Yost feels the Jets can hold the line with Laine due to his 5 on 5 play.

Winnipeg Sun:  Heinola punching well-above weight considering where he was drafted.  Really good read from Scott Billeck on the Jets top pick in 2019. 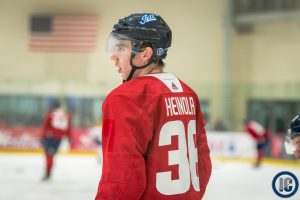 Winnipeg Sun:  Jets Maurice plans to start the season without Laine and Connor.  The Jets could be without Dustin Byfuglien as well as his status remains up in the air.

Winnipeg Free Press:  Jets backup Brossoit one of the few bright spots last season.  (Paywall).  Brossoit has really solidified himself as the backup goaltender for the Jets and I suspect he will be called upon quite a bit this year as we start to see starting goalies playing less to conserve themselves for the playoffs.

Winnipeg Free Press:  Jets trim roster, but biggest storyline still revolves around players not in camp.  (Paywall).  There are three stalls in the Jets locker room that are noticeably empty and it has thrown quite a pall over this training camp.

The Athletic Winnipeg:  How the Jets’ roster is coming together around their unsigned RFAs and a standout prospect. (Paywall).  Ken with a look at how things are shifting into place for the Jets as training camp winds down and the regular season quickly approaches.

The Athletic Winnipeg:  Five points of focus for the Jets as Paul Maurice adapts to Winnipeg’s changing needs. (Paywall).  Murat lets you know what he has observed through camp.

TSN:  Insider Trading.  The TSN Hockey Insiders discuss whether Matthew Tkachuk’s bridge deal will cause a domino effect for the remaining three big name RFAs – Patrik Laine, Mikko Rantanen and Kyle Connor. The Insiders update where negotiations stand for the players with their respective teams, shed light on some early season trade talks, and more.