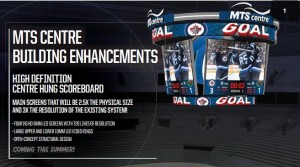 True North Sports & Entertainment Limited today unveiled the major new renovations, improvements and building upgrades scheduled for completion during the summer of 2015. The upgrades and improvements are part of the broader True North 2020 plan that began in 2013.

The following technical upgrades and improvements will be completed this summer in the MTS Centrewith the intention of improving your Winnipeg Jets game and event experience:

– Installation of a new High Definition Centre Hung Scoreboard which will feature four primary screens two and a half times the physical size and three times the resolution of the screens on the existing scoreboard’s primary screens.

– Installation of a new state-of-the-art control room that will allow the production of High Definition images throughout the MTS Centre and improve audio in the existing sound system, and allow for additional cameras which will bring an enhanced scoreboard experience.

In addition, fans will also see the installation of new Premium Loge Seating. These 278 Premium Seats will be accessed through the upper concourse and initially made available to patrons currently sitting in Row 1 of the 300 Level.   At the same time, new seamless glass will be installed in the front row of the 300 Level, replacing the existing mesh railing, providing improved sightlines for 300 Level patrons.  A summary of Loge FAQ’s is attached.

To view a PDF of the 2015 MTS Centre Building Enhancements, please see attached.

An estimated $12 million will be invested into MTS Centre upgrades and enhancements this summer.

MTS Centre opened on November 16, 2004, and has hosted almost 1,400 events since opening 10 years ago, including hockey games, concerts and other entertainment events. In total, MTS Centre has welcomed approximately 9.8 million patrons through its doors.