Note:  With All-Star weekend in the rear window the Jets return from the break sitting in 5th place in the Western Conference with 34 games left to play.  They are in Pittsburgh today and will be practicing in advance of tomorrow night’s game against the Penguins.  Remember that Crosby, Malkin and Letang are expected out of the lineup against Winnipeg.

Winnipeg Sun:  If Jets want to make moves, here’s a few options.  Ken provides you with some food for thought as fans start wondering what sort of improvements may be made to the roster as the team enters the stretch drive to the trade deadline and beyond. 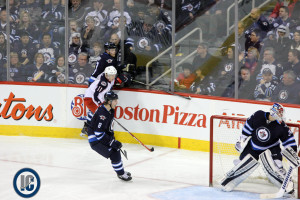 Winnipeg Sun:  Byfuglien doesn’t shine at All-Star Game.  Jets fans won’t lose any sleep over the big man not dominating the All-Star game.  Sounds like he enjoyed himself and will be ready to continue to dominate in the games that count in the standings.

Jets official site:  Byfuglien speaks post All-Star game (vide0).  Hear his thoughts on getting an opportunity to play in a game with his peers.