10 of the most memorable Winnipeg Jets moments of the decade

A look back at the top 10 moments for the Jets over the past decade.

With the decade coming to a close this evening we look back at some of the most memorable moments for the Winnipeg Jets, who have been back in the city now for almost all of it.  Hard to believe this is already the ninth season with NHL hockey back on the prairies.

“Today, on behalf of my family, our partner David Thomson, and our entire organization, I am excited beyond words to announce our purchase of the Atlanta Thrashers,”.  Those words, spoken by chairman of True North Sports and Entertainment Mark Chipman into a microphone inside Bell MTS Centre on a Tuesday morning at the end of May in 2011 galvanized an entire city and province.

As has become the norm for celebrations in this city, Portage and Main as well as the Forks were soon overrun by Manitobans wanting to celebrate the news together. 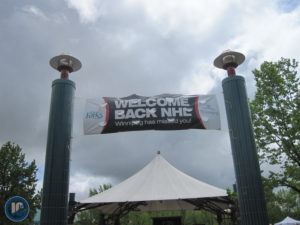 Both before and after the announcement that NHL hockey was returning to Winnipeg it was only natural that the focus of the province became what this new team would be called.  Of course it seemed like a forgone conclusion from the fan base that they wanted the team to be called Jets after the original WHA/NHL squad that was here from 1972 until 1996.  There was a tremendous amount of speculation but up until June 24th, 2011 when Mark Chipman and Kevin Cheveldayoff took to the podium in St. Paul, Minnesota for the 2011 NHL Draft there was uncertainty as to what the franchise from Atlanta would be called when it took up residence inside MTS Centre.

Mark Chipman quickly answered that question when he stepped up to the podium and said “…..it’s now my pleasure to introduce our Executive Vice President and General Manager Mr. Kevin Cheveldayoff who will make our first pick on behalf of the Winnipeg Jets……” which of course was followed by thunderous cheers by the fans inside Xcel Energy Center and back home in Winnipeg at MTS Centre.

How could an exhibition game be a top moment?  Especially one that involved split squads!  Quite easily actually.  If you were inside MTS Centre the energy inside the arena was palpable well before the puck dropped to get the game going.

Fans gave the players a standing ovation during warm up.  And then once the puck was down Dustin Byfuglien did something that likely solidified him as the most popular player for the Jets 2.0 when he laid out two guys in the opening shift of the game.  The crowd went nuts.

It was such a memorable/unusual game.  It was one many fans, when they were dividing up their season tickets had circled, as it was the first time the Finnish Flash would play a regular season game in Winnipeg since February 4th, 1996. 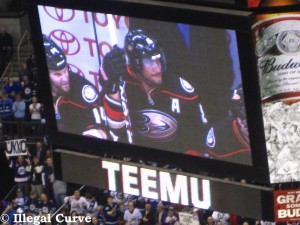 The Jets won, Teemu was celebrated and everyone had a great night.  The 1st period was one beyond description but to best illustrate it was the announcement of the first Anaheim goal.  The crowd booed Corey Perry (goal), cheered Teemu Selanne (primary assist) and then booed Sheldon Brookbank (secondary assist).  Anytime Selanne touched the puck the Winnipeg crowd cheered him including a massive ovation when he was announced as the third star of the game.

Following the game the Finnish Flash spent over nine minutes talking about the reception he received from the fans.

The very first whiteout and first NHL playoff game in Winnipeg since April 28th, 1996.  Seeing the fans and the city in general throwing back to the whiteout was nostalgic for those who grew up with the Jets 1.0 during the 80s and 90s.  While this playoff series ended much like those did, with the Jets knocked out after the opening round, it still allowed the fans to bring a buzz to the arena in downtown Winnipeg. 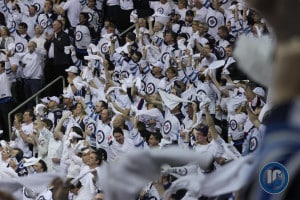 After a disappointing season which came to a conclusion on April 10th with the Jets out of the playoffs fans quickly turned their attention to the NHL Draft.  The team was slated to draft in the 6th spot but 55 minutes into the Draft Lotto Special held on Sportsnet it was revealed by Deputy Commissioner Bill Daly that it would be the Flames not the Jets drafting in the 6th spot which meant Winnipeg would jump somewhere into the top three.  It was down to Winnipeg and Toronto for the top two spots and in the end the Jets would leap four places into the number two spot for the draft to be held in Buffalo in June. 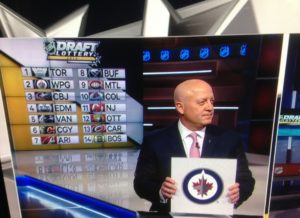 Of course the rest is history with Winnipeg selecting Finnish sniper Patrik Laine of Tappara Tampere.

While the Jets had taken the name of the original WHA/NHL team the old logo, the old music (i.e. Jump) and even the old mascot (Benny) were mothballed for the most part as the new team attempted to forge their own, new identity as a franchise.  It was announced on December 10th, 2013 that Winnipeg would host a Heritage Classic at Investor’s Group Field during the 2015-16 NHL season although this ended up being pushed back one season.  In March of 2016 we learned that there would be an Alumni game headlined by Dale Hawerchuk wearing an 80s style jersey while the present day club would be wearing something inspired by the team from the 1970s WHA squads.

In August of 2016 we got our first look at the Heritage Classic uniforms.  They were an immediate hit. 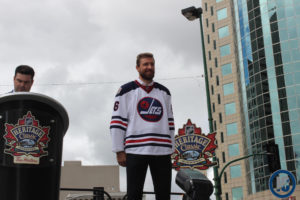 While the Heritage Classic game itself was anti-climactic (a 3-0 Oilers victory) the Alumni game the day before with the Jets and Oilers alumni was a huge hit which included Dale Hawerchuk, Teemu Selanne, Wayne Gretzky and many, many more.

There was even a return of Benny the original Jets mascot.

Since that weekend the Heritage Classic uniforms have been worn at Bell MTS Place and of course the team was involved in another Heritage Classic game this past October against the Flames which meant another jersey, and much like the first uniform, the dark version has been wholeheartedly embraced by the fan base.

About five days earlier on April 6th, 2018 Economic Development Winnipeg announced they would be hosting a street party in conjunction with the first playoff game for the Jets.  It was a phenomenal idea to have the party on Donald and fans totally embraced it.  The best part about the first event was how organic it felt. 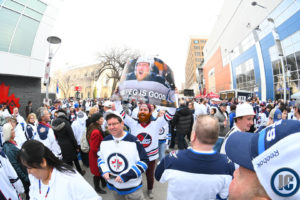 The party that was happening outdoors felt like it was simply an extension of what was happening inside the arena.  Folks wore white and partied with each other while watching the game on big screen TVs set up on the street.  It made for quite the visual whenever it was shown on television and allowed those who didn’t have tickets to feel like they were inside the building.

You knew it was gonna be wild in Nashville when the Jets scored twice in the first 10 minutes and 37 seconds to chase Pekka Rinne from the game.  They would roll on to a 5-1 win and with the victory the Jets moved farther in the playoffs than any NHL team in Winnipeg had eclipsing the two 2nd round appearances of the Jets 1.0.

While they would win just one game against those upstart expansion Golden Knights in the Western Conference Final it was an electric feeling in Winnipeg with folks going to Whiteout watch parties in shorts.  Hockey that late in ‘Peg City felt odd but folks loved every moment of it.

The Blues were a team that was spiraling down, had fired head coach Mike Yeo five days earlier and under new coach Craig Berube were still losing (of course we know how this season would end for St. Louis).

Patrik Laine would have a month to remember in November as he scored 18 goals in 12 games, five of which came on this night in St. Louis.  He scored once in the 1st period, three times in the 2nd period and then completed the game of a lifetime with a goal early in the 3rd period.  He was just the third player since 1997 to score five goals in a game. If you missed it or just want to enjoy it again:

And the achievement would have a life altering impact on one Manitoban as Christopher Haley won over one million dollars thanks to Laine’s five goals. 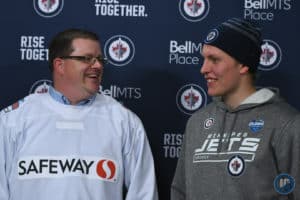 This list likely could have been made into a top 20 or top 30 list.  Feel free to let us know what yours would be.