Return of the Jets: Does an NHL franchise based in Winnipeg have to be called the Jets?

As many in Winnipeg continue to count their Coyotes before they’ve moved, the talk has already moved past if a team will move to Winnipeg to when the team moves to Winnipeg.  Since many view this as a foregone conclusion, the speculation has now turned to what a future NHL team in the city might be named.

The name (and logo) of the Winnipeg Jets remains sacrosanct to most supporters of NHL hockey returning to Peg’.  I would guess that Jets gear (hats, Jerseys, jackets) still outsells Moose merchandise by a wide margin.  From 1972 to 1979, the WHA team was the Winnipeg Jets and that name continued in the NHL from 1979 to 1996.  As we have documented multiple times on this web site, you can pretty much go to any arena or sporting event in North America and the Jets symbol will often be represented. 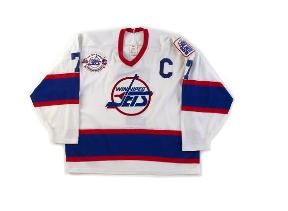 The question for IC readers then becomes: how do you feel about a name other than the Winnipeg Jets?  The first response by many people I’ve posed this question to has been “let’s just get an NHL team back in the city and then we can worry about the name”, although inevitably the next statement usually has been along the lines of “but if it isn’t the Jets then that will be pretty stupid”.

There have been suggestions that TNSE (True North Sports & Entertainment) would like to use the name Manitoba Moose, since they’ve put 15 years into building the brand in the city.  Would using an AHL team name in the NHL be a mistake?  Should TNSE be expected to forgo the amount of time and money they’ve invested in building this brand into one of the top AHL logos?

Some have stated that the team would continue to be called the Jets, but replacing the name Winnipeg with Manitoba to be more inclusive to the rest of the Province.  If you close your eyes and picture Curt Keilback saying “Here come your Manitoba Jets”, it has a decent ring to it, and it still allows fans to chant “Go Jets Go”.

Then there have been those who want to throw back to an old school name like the Winnipeg Victorias (a team in the late 1890’s and early 1900’s who won the Stanley Cup before it became a professional championship) or Winnipeg Monarchs (a team that won the Gold Medal in 1935 for Canada and also won 3 Memorial Cups in 1935, 37′ and 46′).   With the Royal Wedding happening soon, perhaps the romance of the royals will woo you into a vote for these more antiquated names.

Additionally, there are those who would like to take a totally different tack, and move onto an entirely new name, one without any baggage (i.e. one that could make it past the 2nd round).  In that category we place names like the Manitoba Falcons, the Manitoba Chill or Manitoba Bears.

This is a question that requires an answer.  Which do readers prefer? We want to hear from you!

If you don’t like any of the above options, feel free to sound off in the comment section.

4/23 Illegal Curve Hockey Show Part 2
Return of the Jets: The results of the Illegalcurve Poll naming an NHL team in Winnipeg are in and not surprisingly the choice was……