Return of the Jets: The results of the Illegalcurve Poll naming an NHL team in Winnipeg are in and not surprisingly the choice was……

….the Winnipeg Jets!  This should really come as no surprise given the fact that the category was entitled Return of the Jets.  The Jets moniker, attached to the city of Winnipeg was the overwhelming favorite (65%) in our poll in which almost 500 people cast their votes.  If you consider that Manitoba Jets finished 3rd with close to 10% of the vote, the choice seems fairly clear that most want some variety of Jets to be used when a team is brought back to Winnipeg.  As I’ve previously stated, I think people just want to be able to chant “Go Jets Go”.

The 2nd choice, which barely squeaked past the Manitoba Jets, was the Manitoba Falcons.  Perhaps the idea of naming your team after an animal that is endemic to the Manitoba region and is the fastest moving creature on earth (specifically the Peregrine) had fans looking forward to a new look and a fresh start.

So there you have it.  While this poll is by no means scientific, it appears to echo the sentiments we hear and read about on a daily basis.  It would appear that most people who want to see hockey return to the keystone province, also want the nostalgia of the Jets name attached to a future NHL team here in Winnipeg.

Here are the full results and thank you to everyone who participated in the poll (click on photo to enlarge). 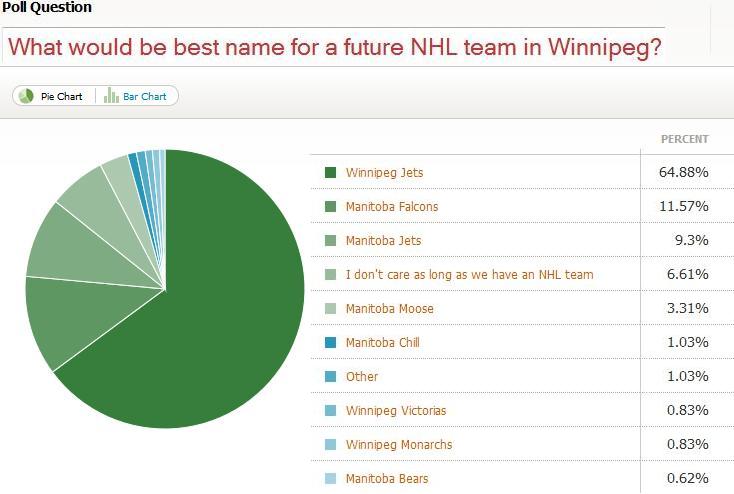