The Science of an Intro Song

When starting a hockey team from scratch, a lot of work needs to be done. As we have seen so far, True North has sold 13,000 season tickets, hired a GM, and held interviews for coaches. Currently everyone is waiting on the team name and colours, but what should really be the topic of conversation is the intro music.

A team’s intro music plays an important part in setting the tone for a game. Picture this, the game is about to start, the lights go dim, the music starts, the announcer says, “Now, here come your Winnipeg ____’s!” and the crowd goes wild. 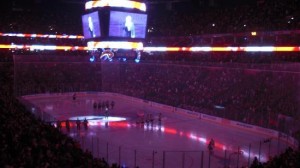 The music when a team steps on the ice, pumps up the players, gets the fans excited and lets everyone in the building know that the home team has stepped onto the ice. The long term effects of a good intro song can be significant, even today, Van Halen’s “Jump” is strongly associated with the Winnipeg Jets, it is difficult to hear that song without thinking of Selanne, Zhamnov, Tkachuk, Carlyle and Housley.

A good intro song should be loud, it should be heavy, it should be fast, and it should have some sort of “epic” factor. It should act as the anthem before the anthems with the players warming up and the fans cheering and singing the words.

I have given it some thought and have made a list of 5 songs to consider for the Winnipeg NHL Franchise intro song.

The classic Winnipeg Jets intro song, it is hard not to think of the old Jets, without thinking of Jump. Eddie Van Halen’s keyboard sets the tone and slowly builds up to Diamond David Lee Roth’s vocals. A great song to skate to, a crowd pleaser, and should bring back memories for Jets fans.

Winnipegger’s are no stranger to AC/DC as 41,000 fans packed into the sold out Canad Inns Stadium last summer for one heck of a concert. Angus Young’s epic guitar riff sets the stage for some heavy drums as the crowd chants THUNDER! THUNDER! This one will get your blood flowing for sure!

Other AC/DC songs to consider: Hells Bells, Back in Black

This song is played throughout arenas & stadiums all over North America. The song starts out with a tease of the main riff which lets you know the team is about to come out. Then followed up by one of the most classic licks in rock history accompanied by a signature Axl Rose screech. This song would make a great choice for any team.

Other Guns N’ Roses songs to consider: Nightrain, You Could Be Mine

#4:  Metallica – For Whom the Bell Tolls

The bell signifies that the team is about to enter, the lights close. The team enters to the heavy rhythm of James Hetfield followed by the high pitched wail of Kirk Hammett’s lead. This song is sure to send chills down your spine.

This track starts off with a great intro as the guitar mimic’s a motorcycle engine, and strolls into an up-tempo riff by the great Mick Mars. This one should get the crowd pumping and bring life into the building.

Other Motley Crue songs to consider: Dr. Feelgood, Wild Side

While it is clear that I prefer my team intros to be 80’s arena rock, the question is completely subjective and depends on personal preference. However, it’s no coincidence that the songs picked above are played in hockey arenas throughout North America. These songs are meant to be played LOUD and get you excited. Any song listed above would be a fine (albeit typical) choice to lead into a hockey game. As for a verdict, I believe that the players should have some say as to what song they skate out to as they are the ones who are playing the game, but for the first game, my pick is Van Halen’s Jump.

If you have an opinion on what you think should be played when the team walks out onto the ice, post your thoughts in the comments.

One thing we can all agree on is that the intro song should definitely not be anything by the Black Eyed Peas, or Nickelback.

Prospect Pulse: Mocking the Draft
Return of the NHL: Dates to know for the Upcoming Season