The Moose played three games this past week – the second of two games against Detroit’s farm club, the Grand Rapids Griffins, and another two-game set, this time against the baby leafs, the Toronto Marlies. The Moose started off with a 2-1 win against the Griffins, on the back of Eric Comrie 37-save effort, but then lost the next two against the Marlies – the AHL’s top team –  losing by a combined score of 7-1. J.C Lipon and Josh Morrissey led the team in scoring this week with 2 (powerplay) points each, as the Moose scored 2 of their 3 goals with the man advantage.

The only player who really stood out last week was Comrie. He stopped 101 of the 108 shots he faced, (the team allowed 8, but one was an empty netter), for a save percentage of .935; of the 7 goals he gave up, only the Soshnikov shot should be stopped consistently. Furthermore, while Jets fans witnessed a 42-save performance from Linus Ullmark on Sunday, very few of those shots were from dangerous areas – in stark contrast, Comrie faced a steady barrage of high-quality chances in about 7 of those 9 periods, and came out on top the vast majority of the time. In fact, of those 7 goals, 4 came on the powerplay, meaning he only gave up 3 goals at even-strength. A  growing trend when evaluating NHL goaltenders is to look at their even-strength save percentage – which makes sense, given that they’ll tend to face more shots on the powerplay which are virtually unstoppable. While I don’t have the detailed stats, I’m guessing that Comrie’s *even-strength save percentage was in the .950 – .960 range, which is a small sample size, but also absurd given how highly skilled Grand Rapids and Toronto are. The Marlies are second in the AHL in goals-per-game, while Grand Rapids ranks fifth.

*the Moose gave up 14 powerplays – if we assume that they gave up 2.5 shots per powerplay, and then subtract that from their total shots allowed (107), they gave up 3 goals on roughly 75 shots while at even-strength (.960). 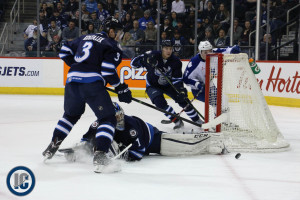 Furthermore, the attitude, composure, and intelligence that Comrie displays off the ice is almost as impressive as his play on the ice. Comrie always speaks intelligently in post-game scrums, with a very objective view of both his play, and that of his team. He’s a perfectionist, who always thinks he could have done more – for instance, when asked whether he thought he could have stopped any more pucks in the 4-0 loss on Saturday, he said “probably goals 2 and 4” – i.e, not just the shot by Soshnikov mentioned above, but also a shot he missed through a screen – “I need to battle harder to find that puck through traffic”. Coach Keith McCambridge often praises his work ethic, his positive attitude, and his overall coachability. He’s easily the Moose MVP thus far this season, and to be frank, it’s silly that Connor Hellebuyck was recently voted into the AHL All-Star game, because as good as he was in his early season play with the Moose, Comrie was at least as good as Hellebuyck, and I’d probably argue better (based on watching Comrie play 14 times, and Hellebuyck, 6 times). Now that doesn’t mean that Comrie is a better prospect than Hellebuyck, but it does show how impressive his rookie season has been thus far.

To illustrate this, here are the top-20 scorers from the 2009-2010 season. From that group of 20, only 2 players currently play in the NHL – David Desharnais, and Tyler Ennis. Similarly, if you look at the scoring list from the 2005-2006 season, there are only about 4 players there who became long-time or impactful NHL’ers. (Hudler, O’Sullivan, Penner, Kopecky).

How might one better predict which AHL’ers will be promoted to the next level? Age. If you re-sort the 2009-2010 list of scorers by rookie status, you get some of the stars of the NHL – Subban, Carlson, and Couture, other solid players – Eller, Condra, Ennis (again), and a few others who have spent time in the NHL (Blum, Tangradi, McBain, Terry). Youth may not rule the AHL, but usually those first and second year AHL’ers – most of whom are between 20 and 22 – are significantly more likely to go on to an NHL career than a player in their mid or late 20’s, even if that older player is having tremendous AHL success.

In the case of the local team, it means that young players like Petan (20), Comrie (20), and Lipon (22) are more likely to have long careers in the NHL than veterans like Cormier (25), Albert (26), and Fraser (25). A defenceman like 20-year-old Josh Morrissey is far more likely to play in the NHL than the Moose’s leading scorer, 23-year-old defenceman, Brenden Kichton, despite the fact that Kichton has twice as many points, and has had a greater impact for the Moose thus far. This doesn’t mean that the stats are meaningless, only that you need to consider other factors when looking at those stats, with age being a prime factor. (Size and skating ability are big factors, while draft status is often a good marker too.)

As another example, Jordan Weal was recently traded from the LA Kings to Philadelphia, in exchange for Vinny Lecavalier and Luke Schenn. The deal was primarily a salary dump for Philly, meaning that Weal wasn’t much to give up for LA, despite the fact that he was the Calder Cup MVP last year, and has posted 139 points in the past 149 AHL games. At 23 going on 24, the Kings didn’t see Weal as a high-end prospect, and were fine to let him go. By contrast, if 20-year-old Nic Petan is able to put up around a point-per-game in his rookie season, it will be looked upon with far more optimism.