Playing their second game in the back-to-back series, the Moose again took on the Toronto Marlies at the MTS Centre. The Moose were looking to win their first game against the Marlies this season, after losing Friday night’s game 3-0, (though the score was 1-0 through 58 minutes), and their 5 match-ups this season by a combined score of 23-6. 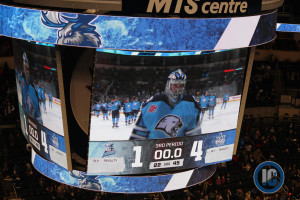 After Rich Clune threw a big, semi-questionable hit on Austen Brassard, Darren Kramer jumped him and took 2 minutes for roughing. On the ensuing powerplay, the Marlies got a few good chances off of great puck movement, but Eric Comrie made about 3 nice toe saves to keep the game scoreless.

The game was scoreless after 1, with shots 13-7 in favour of the Marlies, and scoring chances around about 5-1 Marlies.

A minute into the second, Jeremy Morin took a shot from the right circle -a pinching T.J Brennan gathered a juicy rebound, and found the half-vacant net to put the Marlies up 1-0.

Almost halfway into the second, Nic Petan and Scott Kosmachuk came in two-on-one – Petan patiently kept the puck and got the goaltender one-on-one, but former NHL tender Ray Emery was able to get a pad on his deke.

Shortly thereafter, a Marlies foray into the offensive zone left Matt Frattin all alone in the slot, but Eric Comrie made a very nice glove save to keep the Moose within 1.

With 4 minutes left in the second, and Marlies forward Jeremy Morin in the box for high-sticking, Josh Morrissey tee’d up J.C Lipon for a one-timer from the left circle, which beat Emery to tie the game at 1.

In the late second, the Marlies made a bad change and Ryan Olsen was able to get a clean breakaway against Ray Emery; Olsen made a fake and pulled the puck to his backhand, but Emery didn’t bite and turned it away easily.

At the end of two, the score was tied at 1, but the Moose were getting significantly outplayed, with the shots 30-15 for the Marlies.

5 minutes into the third, with Nic Petan in the box for hooking, Josh Leivo took a half-slapper through a screen which beat Comrie glove side, putting the Marlies up 2-1.

With Jimmy Lodge in the box for tripping, (a phantom call by the refs), another impressive Marlies PP worked the puck around well, and Jeremy Morin blasted a one-timer past a helpless Eric Comrie, making the score 3-1 Marlies.

Halfway through the third, Nikita Soshnkov came in off the rush and took a low wrister from the left face-off dot, which beat Comrie low glove, putting the Marlies up 4-1.

Eric Comrie – Despite giving up 4, Comrie was fantastic through most of the game, and kept the Moose tied through two periods, in a game which they had no business being in. He had no chance on any goal other than the 4th, and made a half-douzen stops that could easily have snuck by.

Josh Morrissey – He had an assist on Lipon’s game-tying goal, and a huge hit on Zack Hyman. Overall, Morrissey was noticeable tonight in a positive way.

J.C Lipon – The spark plug scored the only goal of the game for the Moose – which tied the game (to that point). He also laid a few hits, and played with his usual jump and gumption.

Jay Harrison and Thomas Raffl remained out for today’s game. Raffl may play in the next few games, while Harrison is likely out a little longer.