The Moose played Friday night at the MTS Centre, facing the Leafs’ AHL affiliate, the Toronto Marlies. Coming into the game, the Marlies had outscored the Moose by a 14-goal margin (20-6) in their previous 4 meetings, including a 9-0 drubbing in early December. After being concussed at the World Junior tournament, high-end Leafs prospect William Nylander was not in the Marlies’ lineup. 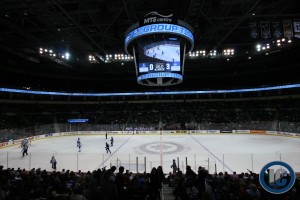 The Moose out-shot the Marlies 11-0 to start the game, but generated only a handful of quality scoring chances

Early on, Austen Brassard made a nice feed to Ryan Olsen in the slot, but instead of trying to shoot from a prime spot, Olsen tried to make another pass, and the chance was wasted.

A few minutes later, John Albert fed a nice pass through a defender’s legs to Matt Halischuk; Halischuk was all alone in front, but tried to out-wait the goaltender, and was unable to beat him.

The Marlies also missed a good chance when Matt Frattin broke in alone and made a nice deke to his forehand, but Eric Comrie went spread eagle and Frattin ran out of room.

The first period was scoreless, with shots 13-5 for the Moose

All was quiet in the second period until Andrew MacWilliam took a high-sticking penalty; on the powerplay, the Marlies worked it around the outside until Josh Leivo drove a one-timer from his off-wing, just beating Comrie high on the blocker side. 1-0 Marlies.

After killing off a Julian Melchiori penalty, Patrice Cormier busted in down the right-hand side, cut in, and made a beautiful forehand-backhand move. He nearly pulled off the Peter Forsberg, one-handed backhand finish, but the goaltender just kept it out with his toe.

Shortly thereafter, Brenden Kichton made a great cross-ice saucer pass to Ryan Olsen, but goaltender Rob Madore read the play nicely and got across to make the save.

After Brendan Kichton got beat wide, Eric Comrie made a potential game-saving stop on Zach Hyman’s backhand deke with 4 minutes left to play, keeping the Moose within 1.

With 2 minutes left, Stuart Percy took a wrist shot from the point through traffic, which beat a screened Eric Comrie, and put the Marlies up 2-0.

Then, with 1:38 left, the Marlies scored into an empty net.

Eric Comrie – As always, Eric Comrie was good tonight. Perhaps he made one mistake on the first goal, but the second goal was a heavy screen, and the third was an empty-netter. For a 20-year-old rookie goaltender, he has been incredibly impressive this year – of the 13 times I’ve watched him play, I haven’t seen him play a bad game yet, and he has been exceptional in at least 4 or 5, and good or very good in the rest. With Connor Hellebuyck already up with the Jets, the Moose have tremendous goaltending depth when you add Comrie to the mix.

John Albert / J.C Lipon – Both had a lot of jump, and had a few good flurries in the offensive zone. Overall though, none of the Moose skaters made a huge impact tonight.

Jay Harrison and Thomas Raffl did not play again tonight – Raffl is day-to-day, Harrison is week-to-week.