Moose trounced by Monsters in 7-3 loss

The Moose took on the Columbus’ AHL affiliate, the Lake Erie Monsters, Monday night at MTS Centre. Coming into tonight, the Moose had lost all 4 of their previous meetings, and were outscored 13-4 overall. Just prior to the game, Jets’ defenceman Paul Postma was assigned to the Moose on a conditioning stint, and was put into the starting lineup. 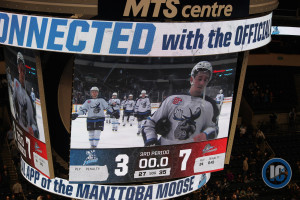 Early in the game, Andrew MacWilliam threw a huge hit on the skilled, but undersized forward, T.J Tynan, which drew a large crowd of “Monsters” and led to a (brief) Moose powerplay. Unfortunately, the Moose took a too-many-men call one minute in to nullify the man advantage.

With 5 minutes left in the first, Michael Chaput took a dangerous shot from the slot – it appeared that Eric Comrie had the rebound, but Trent Vogelhuber skated behind Comrie, picked out the puck, and put it in the empty net. 1-0 Monsters.

With 16 seconds left in the first, John Albert rounded the net and made a great pass out front to Matt Halischuk, who tipped the puck into the top of the net, tying the game at 1.

The score was 1-1 after one; scoring chances were about 4-2 for Lake Erie, while shots were also in Lake Erie’s favour, 12-7

7 minutes into the second, Paul Postma was caught wandering, leaving Michael Chaput wide open in front of the Moose net. Sonny Milano fed the puck across, and Chaput roofed the tip. 2-1 Monsters.

With just over a minute left in the second, Josh Morrissey made an ill-advised deke at the Monsters’ blueline, which created a fast-break the other way; Eric Comrie ended up making two huge saves, but lost his goal stick in the process, and after the Monsters retained control of the puck, Daniel Zaar was able to beat Comrie on a one-timer from the high-slot. 3-1 Monsters.

After two, the Moose were down 3-1, outshot 24-15, and badly out-chanced; the Moose defence got walked through like a knife through butter on several occasions – if not for Eric Comrie, the game would have been completely out of hand by this point.

A few minutes into the third, after J.C Lipon made an atrocious giveaway at his own blueline, the Monsters easily cut through the defensive pair of MacWilliam-Melchiori, and former Portland Winterhawk star Oliver Bjorkstrand found Sonny Milano wide open back door, and Columbus’ 1st round pick in 2014 found the empty net. 4-1 Monsters

Under a minute later, the Monsters’ controlled the puck in the Moose zone, and Monsters’ captain Ryan Craig deflected a slapper past Comrie to put the Moose down 5-1. Comrie was pulled at this point, though not for poor play – the Moose left him out to dry tonight.

With 10 minutes left, the Moose got a powerplay after Brett Galant tried to fight not one, but two players at once (that’s a new one); on the pp, the Moose got a few golden opportunities, and eventually worked the puck back to the point where Paul Postma beat Brad Thiessen to make it 5-2.

29 seconds later, Joe Devin picked up a rebound off an Oliver Bjorkstrand rebound and put it home. 6-2 Monsters.

Just 11 seconds after that, Jiri Fronk broke in on the rush, took a wrister at the net, and dove after his own rebound, backhanding the puck past an out-of-position Thiessen, making it 6-3. That ended a flurry of 3 goals in 40 seconds.

Jiri Fronk – In his first game of the new year, Fronk was noticeable on the ice, generating a few good scoring chances off the rush, using quick hands and a nice release, and scoring the Moose third goal to help make a game of it. It’s odd that he’s been out of the lineup as much as he has this season, given that he has 3 goals in just 12 games – which is as many as Matt Halischuk has in 27 games, and 1 more than Matt Fraser has in 24 games.

John Albert – The captain made a great pass to tie the game in the first period, and a few other nice plays in the offensive zone. Always hustling and making generally smart plays, he’s a very solid player at the AHL level.

Thomas Raffl – jaw – while it was thought that he was close to suiting up with chin protection attached to his helmet, he hasn’t been cleared for contact in practice, so his time table is probably pushed back to week-to-week