The Moose played their second of two games against the Lake Erie Monsters (NHL Columbus) on Wednesday night. After surrendering 5 goals, and being pulled for the first time this year, Eric Comrie was right back in net, ready to deliver more of the solid goaltending we’ve come to expect from him this season. 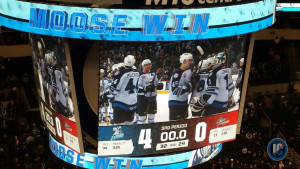 For the first 19:45 of the game, the only significant event was Julian Melchiori stapling Sonny Milano to the boards just outside his own zone – the same spot where Josh Morrissey has crushed two different guys in the new year.

With about 15 seconds left in the first, J.C Lipon picked up a rebound at the side of the net, and though he had bit of room, he was hooked as he was shooting; instead, he took the puck behind the net and wrapped it around, beating Brad Thiessen and putting the Moose up 1-0.

The Moose led 1-0 after 1; shots were 10-a-piece, but apart from the goal, neither team had many good chances

Just over four minutes into the second, on a Moose PP, Chase de Leo passed the puck out front to Austen Brassard, who took a shot from the slot – the rebound came to De Leo, who scored to put the Moose up 2-0.

Just two minutes later, Jan Kostalek tee’d up De Leo from the right circle, and he fired a wicked shot into the top of the net to put the Moose up 3-0.

With 7 minutes left, and the Moose in control, Nic Petan found Jiri Fronk alone in the slot – Fronk made a quick fake and then went backhand shelf, putting the Moose up 4-0.

Chase De Leo – He created, and finished the play for his first goal, and had an absolute snipe for the second. He has one of the better shots on the team, and seems particularly adept at beating goalies high. He’s also quite strong on the puck for a guy who is generously listed at “5’10, 185”. As I’ve written before, he has probably been the most consistent forward for the Moose this season, as he is usually generating chances even when he’s not necessarily hitting the score sheet. Overall, he’s having a very impressive rookie season, leading the team in goals (11) and second in points (20).

J.C Lipon – He got the team going with a goal late in the first on a nice individual effort, and got the Gordie Howe hat trick midway through the game with 1G, 1A, and a fight. After De Leo, Lipon has probably made the most impact game-in, game-out for the Moose, as he also generates a lot of scoring chances, and has been a decent finisher at this level, with 8 goals in 29 games. (On pace for 22 in a full season).

Eric Comrie – In possibly his easiest game of the season, Eric Comrie did all he had to do to get the first shutout of his professional career, making 24 saves. After a stretch of games which saw him face 44, 38, 36,38, 25, and 45 shots, before being pulled in the last game, it must have been refreshing for the Moose goalie to play a game where he didn’t have to save the day.

Lodge has had a tough start to his pro career, going pointless through 20 games. However, last game he suddenly started to look more a bit comfortable, and today he had by far his best game, creating some nice chances, and managing the puck well in situations that were previously giving him a lot of trouble.

Matt Fraser returned to the Moose lineup, while Thomas Raffl and Jay Harrison are still out. Harrison may play on the upcoming road trip, while Raffl remains out indefinitely.