The Moose played four games last week – two at home against the Lake Erie Monsters (Columbus), followed by two on the road against the Charlotte Checkers (Carolina). Monday’s game went badly for the Moose, as they lost 7-3 in a very poor defensive effort. By contrast, Wednesday’s game was one of their best games of the season, as they beat a listless Lake Erie team 4-0, with Eric Comrie registering the first professional shutout of his career. (After the game, Kevin Cheveldayoff was heard saying”did you see that save by Comrie? The way he stretched out at the end was unbelievable!”) The Moose lost their games on Saturday and Sunday, as they ran up against a Charlotte Checkers squad which has a record of 13-1-1-1 in their past 16. They fought admirably in Saturday’s game, as they clawed back from 2-0 down to force OT, before losing 3-2, while Sunday was a tougher game, as they played with just 11 forwards after J.C Lipon and Patrice Cormier were recalled by the Jets (they lost 4-1). They now travel to Ontario, CA to face the LA Kings’ AHL franchise, the Ontario Reign – last year’s Calder Cup Champions.


(1) If the Moose were an NHL team, and sat in second last place overall, chances are that a lot of fingers would be pointing at the Head Coach. But the spotlight isn’t on Winnipeg’s second professional hockey team, and that’s a good thing, because it would be unfair to hang this team’s performance on Keith McCambridge. This is the same coach who took the St. John’s Ice Caps to Conference Finals in 2011-12, and the Calder Cup Finals in 2013-2014. It’s not like he suddenly forgot how to coach; what did happen is that the players who made that 13-14 team all departed – his veteran defencemen, like Zach Redmond, Will O’Neill, and of course Ben Chiarot, who’s now with the Jets – as well as his high-end forwards – Eric O’Dell, Andrew Gordon, Jerome Samson, and Kael Mouillierat. Those players were replaced by rookies, and while guys like Nic Petan, Chase de Leo, and Josh Morrissey are showing a lot of promise, they can’t replace the consistency of a player in their mid-20’s, who already has several successful years under their belt.  Injuries have also been a factor, as guys like Thomas Raffl and Jay Harrison were counted on to be leaders both on and off the ice, but have missed large chunks of time. McCambridge would never make these excuses because it shows a lack of confidence in his group, but I’m of the opinion that you can’t evaluate a coach if he doesn’t have the horses. 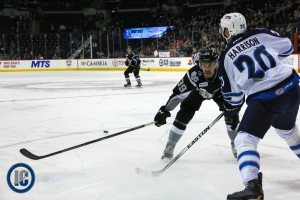 (2) With injuries to several Jets forwards, like Scheifele, Stafford, and Lowry, there’s an upcoming opportunity for two Moose forwards – Patrice Cormier, and J.C Lipon. Given that he’s already played 51 NHL games, Cormier is a player the Jets feel comfortable with. He can slot in as the 4th line centre, win a few draws, and be decent defensively, but he doesn’t offer much in terms of offence. Meanwhile, J.C Lipon has earned his very first NHL call-up. He was one of the final cuts in training camp, and has been one of the best Moose forwards all season. He’s known primarily for his grit and tenacity, but he has also worked really hard on his conditioning and his leg strength in particular, and as a result, he’s become a pretty good skater. While he’s primarily an “energy guy”, he does like to shoot the puck, and can be counted on to bury a few if he gets the chances. Of the two players, Lipon is the one who stands to make a bigger impact, and has a better shot of sticking with the big club in the long-run.

(3) Before the season started, I don’t think many people had huge expectations for undersized forward Chase De Leo. Drafted 99th in 2014, he hasn’t really appeared in the conversation of top Jets/Moose prospects, as higher-profile guys like Petan, Hellebuyck, Morrissey, Armia, and Comrie receive most of the attention. And yet, through 37 games, he’s probably been their top forward on a game-to-game basis. Not only is he leading Moose forwards in goals and points, he’s tied for 8th in goals scored amongst all rookies. But what’s more impressive is that his offensive production is coming on a team which has struggled offensively. The Moose are last in the AHL in goals scored, meaning that De Leo’s 11 goals represent nearly 15% of his team’s total of 76. By contrast, the league’s leading rookie goal scorer, Devin Shore, has 15 goals, but he also has tremendous support around him, as his team has scored a league-high, 159. For De Leo to be one of his team’s biggest offensive contributors this early in his pro career is a very promising sign.

While De Leo doesn’t have the size you’d want in a prospect – 5’9, 180 – you wish that you could copy his work ethic, his attitude, and his playing style. He’s fueled by a love of the game, and is part of a small group of guys who need to be dragged off the ice after practice, along with Nic Petan and a few others. His attitude is upbeat, but he stays on a pretty even keel – rarely getting too high or too low. He also plays a very smart, well-rounded game, as he uses his teammates well, and always seems to be around the puck. The main thing he’ll need to work at over the next few years is his skating – he has enough quickness to separate himself from defenders at the AHL level, but he’ll need an extra step or two to pull away from quicker, smarter defenders, in the NHL, especially given that he won’t be able to out-muscle them. In the worst-case, De Leo’s looks like he’ll become a high-end AHL player who will provide depth for the organization; however, if he truly has the will and the smarts he’s shown thus far, he may keep improving to the point where he outgrows the AHL and starts banging down the door to the NHL.

Looking for updates on any other top Jets prospects playing for the Moose? Check out these past articles: