(1) Is Everything OK with Josh Morrissey?

After a steller junior career, two appearances for Canada at the World Juniors, and the label of “first-round draft pick”, expectations were high for Josh Morrissey coming into the season. But with 3 points through 23 games, things aren’t going according to plan so far. As a Jets’ fan, how concerned should you be? 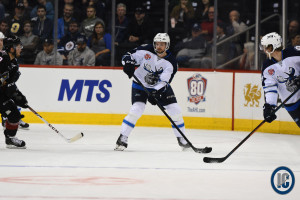 Firstly, it’s easy to look at Morrissey’s lack of point production and be nervous about his progress. But is it really a damning sign if Morrissey can’t produce offence in his first AHL season, at 20 years of age? Perhaps we need some context – here’s a sample of how some of the NHL’s best at the position were doing at the start of their AHL careers:

(As an aside, Kevin Shattenkirk actually managed 0 points in the first 10 AHL games of 2010, then was called up and posted 43 points in 72 NHL games.) While the numbers there certainly aren’t bad, they also weren’t an indication of big-time offensive talent, or Norris Trophy pedigree. (It should be noted that most of those players made it to the NHL by their second pro season.)

Another thing to keep in mind when assessing Morrissey is the quality of his team. Most defencemen aren’t dominant enough that they can lead the offence without support – there are exceptions, like Erik Karlsson, P.K Subban, and Oliver Ekman-Larsson, who have put up big numbers in recent years on teams with pedestrian offences, but most d-men with big point totals play on teams with a lot of high scorers. In this particular case, the Moose are last in the league in offence, and not by a small margin – with 41 goals scored, they’re 11 goals behind the next lowest scoring team, and are averaging less than 2 goals per game. If Morrissey had just 3 points on a team like the Toronto Marlies, or the Texas Stars, each of whom has scored 106 goals already, then there would be great cause for concern. But on a team where the leading scorer has just 13 points, it’s hard to fault him for his lack of offensive production thus far.

How about his overall play? One might rightly suggest that another reason expectations were so high for Morrissey was due to the way he performed in the 2014 playoffs, where he helped the Ice Caps’ make the Calder Cup Finals as a mere teenager. In that run, he played top-4 minutes, and added 9 points in 20 playoff games. But again, context is needed here – Morrissey wasn’t asked to be a top-pairing defenceman on that team, as he has been for the Moose on many nights this year. That Ice Caps team featured three very good two-way AHL defenders – Zach Redmond, Ben Chiarot, and Will O’Neil, all of whom had size, skill, and experience. Morrissey was able to slide in on the second pairing, and played mainly with O’Neill, who led all defencemen in playoff scoring that year with 16 points. Now with the Moose, Morrissey often pairs with Andrew MacWilliam, a guy who plays a hard game, but is limited in terms of skill and skating ability.

The positive traits which Morrissey has shown this year are the standard hallmarks of his game – he’s a very fluid skater who makes excellent passes and plays with tremendous poise. He also has a good shot and is good at reading the play, knowing when to pinch and when to retreat. In my opinion, the things holding him back are his confidence, and the talent that surrounds him. He isn’t a pure offensive defenceman who can drive the play from the back-end, he’s the guy who makes smart outlet passes from his own zone, joins the rush at appropriate times (as he did Sunday, scoring his first of the season), and helps run the powerplay. When he does that on an average team, his stats look fine, and when he does it on a really good team, they start to look impressive. But in the midst of adjusting to a higher level of play, he’s caught on a team which can’t score, and the combination is making things look worse than they really are. At 6′, 190, he still needs to get stronger, and as coach McCambridge pointed out in an interview last month, he also needs to learn to play with a bit more pace. (He sometimes looks almost too relaxed out there). But I don’t believe there’s anything wrong with Josh Morrissey’s game, and I’ll be surprised if his play and his stats aren’t markedly better over the remaining 53 games of the season.

The Moose came away with 3 of 4 points this weekend against the Milwaukee Admirals (AHL Nashville), winning Saturday’s game 3-2, and losing in a shootout on Sunday, 4-3. They got a big performance from Eric Comrie on Saturday, as he earned first star by stopping 30 of 32 shots en route to the win. Then on Sunday, Josh Morrissey played his best game of the season, scoring his first of the year, and also making a few great defensive plays, including a deft play to break up a 2-on-1 while shorthanded.

Overall, the Moose are still very much a work in progress. Not only are they a young group – eight players from Saturday’s lineup are 21 or less – Comrie, Kostalek, Morrissey, Olsen, Petan, de Leo, Kosmachuk, and Fronk – but the group hasn’t played together for very long. The only returning players from last year who have played at least 2 AHL seasons are John Albert, J.C Lipon, Patrice Cormier, Brenden Kichton, Julian Melchiori, and Austen Brassard. They brought in several veteran players to fill that void, and while there have been a few injuries, it’s still fair to say that Matt Halischuk, Matt Fraser, Andrew MacWilliam, Jay Harrison, and Thomas Raffl haven’t made the impact that the team was expecting. For the most part, the best players on this team have been the youngsters, like Comrie, de Leo, and Petan – all of whom are 20 – while the best “veterans” have been Lipon (22), Armia (22), and Kichton (23). The Moose will need a whole lot more from Albert, Harrison, Halischuk, Fraser, and Raffl if they’re going to turn things around.

The team plays three games this week – two home games against San Antonio (AHL Colorado), and then a road game against Milwaukee next Saturday. Their record stands at 6-14-1-2 on the season, the third-worst winning percentage in the AHL – and time is quickly running out on their playoff hopes. At this point, they’ll probably need to win about 2 of every 3 games the rest of the way out in order to have a shot.

On the injury front, J.C Lipon missed the past two games, and will likely miss this week’s action as well. Despite the injury, Lipon continues to lead the Moose in scoring, with 13 points. Meanwhile Brenden Kichton also sat out Sunday’s game, but he’s close to returning, and may play this week.

Whereas last year, the Jets had three prospects on Team Canada alone (Morrissey, Petan, Comrie), it looks like there will be no more than three total at this year’s tournament. Michael Spacek (Czech Republic) and Sami Niku (Finland) are virtual locks to make their teams, having already played in last year’s tournament. Meanwhile,  Pavel Kraskovsky is among 18 forwards at Russia’s camp looking to make the squad.

But the real story is who wasn’t invited. Team USA raised a lot of eyebrows this past week when they overlooked several high-end prospects, most notably (for Jets fans), last year’s two first round picks, Kyle Connor, and Jack Roslovic. The decision was panned by Craig Button, Julie Robenhymer, and several others, but it seems that at least one of the players has taken things in stride. That would be Kyle Connor, who appears to have used the snub as motivation, potting 5 goals and an assist in just two games this weekend. His tear is reminiscent of Max Domi – who shockingly, wasn’t invited to Canada’s 2014 World Junior selection camp (neither was Darnell Nurse), and responded with a 12-game point streak, where he collected 31 points. Let’s see if Connor can do likewise. Roslovic, meanwhile, hasn’t played since the US announced the camp roster, so we’ll see how he fares in the coming games.

Moose sunk by Admirals, 4-3 in a shootout
Moose offence runs wild in 5-1 victory over Rampage