Moose sunk by Admirals, 4-3 in a shootout

Breaking down the 4-3 shootout loss.

The Moose took on the Milwaukee Admirals (AHL Nashville) in game 2 of their back-to-back, after winning 3-2 Saturday night. Thus far, the Moose have won every game against Milwaukee this season, each by a 3-2 margin. They looked to keep that streak alive Sunday afternoon in front of a sellout crowd at the MTS Centre. 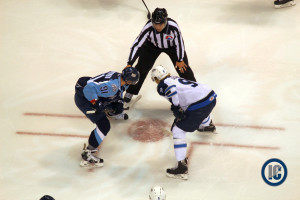 Nic Petan – While he didn’t register any points on the night, Petan seemed to do everything well. He showed tremendous determination in winning puck battles against bigger players (generously listed at 5’9, that would include any other player). With his speed and skill, he was one of the few Moose players who was consistently able to enter the zone with control of the puck. He was good on the powerplay, able to create space with his quick hands, and make plays with incredibly precise passes. He meshed well with anyone who had the opportunity to play with him, particularly Joel Armia, and also Josh Morrissey when they were matched up together on the PP.

Josh Morrissey – He scored the Moose’s first goal by jumping up in the play smartly, and also made a tremendous play in the defensive zone, breaking up a short-handed two-on-one. With Brenden Kichton missing today’s game, he got an opportunity to play on the #1 PP unit, and he looked very comfortable quarterbacking along with Nic Petan.

Chase de Leo and Joel Armia – de Leo showed a lot of jump tonight, creating a few dangerous chances with his feet, and also moving the puck well, particularly on the PP. Armia was also dangerous at different points in the game, using his size and hands to threaten defenders off the rush, and create chances both for himself and his teammates.

J.C Lipon missed his second game of the year (and second straight). He’s expected to be out for another week or two.

Brenden Kichton also missed the game, but is only considered day-to-day.