The Moose took on the San Antonio Rampage – farm club of the Colorado Avalanche – in a Wednesday night affair at the MTS Centre. The Moose came in looking to improve their record, which sat at 6-14-1-2, third last in the AHL. Adam Lowry played his first game in a Moose uniform, just hours after being re-assigned to the AHL. 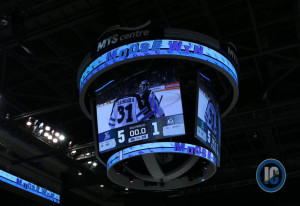 Overall, the Moose played their best game of the season, out-shooting the Rampage 36-23, setting their widest margin of victory at 4 goals, and hitting their season high in goals scored, with 5. (The previous season high was just 3.)

Eric Comrie – A very solid performance, he made several big stops when the Moose were clinging to a 1-goal lead.

Matt Halischuk – good hustle – especially while shorthanded – noticeable in the offensive zone, and a great snipe for the game-winner.

Adam Lowry – first and foremost, he was really good on the penalty kill tonight, breaking up plays, and generating a good chance as well. He played a prominent role in the offensive zone, with 4 shots on net, and had a few other chances which went just wide. He also played with an edge, and got his nose dirty. A very good debut.

Which Player is Getting The Call-Up?

With Adam Lowry’s demotion, a forward will be called up prior to the Jets’ Friday night game against New York. Prior to tonight’s game, one might have assumed that Joel Armia was most likely to fill the spot, given that he was with the team for several games on their most recent road trip. (Though he didn’t play). However, with Paul Maurice watching from the press box, Armia had one of his worst games of the season, creating very little, and giving up the puck on multiple occasions, often in high-risk, low-reward situations. That doesn’t mean that Armia won’t get the call, but it creates some doubt, especially given that Patrice Cormier has also been a call-up option for the Jets this season, and was named 1st star tonight.

J.C Lipon remains week-to-week, while Thomas Raffl also missed the game with an injury. Raffl’s story is interesting – he recently took a puck to the jaw in practice, but came back and actually played both games this past weekend before leaving with a back injury. It wasn’t until the back injury that they checked things out and discovered that he had broken his jaw. He’ll likely be out for several weeks.