The Illegal Curve “Will Ezzy Wake Up Early?” Charity Challenge

Are you on team Ezzy or Team Drew/Richard. Do you think Ez can wake up for this week’s 7am show? You can put your money behind either team and help support a great cause.

Back on February 11th, due to an afternoon Jets-Penguins game, The Illegal Curve Hockey Show went on air at 7 a.m. on TSN 1290, five hours earlier than the normal start time.

Due to an unintentional cell phone alarm clock malfunction, Ezzy pulled a Tyler Seguin, slept in and missed the first 25-30 minutes of the show. 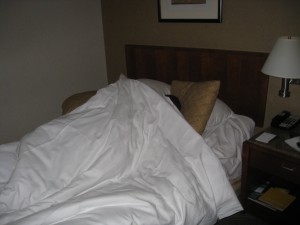 Admittedly, this was not the first time Ezzy missed an early morning Illegal Curve Hockey Show, as back on November 19th, he missed the first hour and a half of a show that also started in the early hours of the morning (8 a.m. CST).

On this past Saturday’s Illegal Curve Hockey Show, IC Host Drew Mindell was previewing our next show (February 25th), and stated that there was no way that Ezzy was going to be able to wake up on time, as the show is once again scheduled for 7:00 a.m. CST.

Drew put his money where his mouth is, by stating that he would donate $50 to a local charity if Ezra arrives on time. Conversely, Ezra matched that challenge, by agreeing to donate $50 to a local charity if he sleeps in and arrives late. Richard Pollock then joined the fun, saying that he didn’t believe Ezra would show up on time either, thus joining Team Drew, and formally establishing the battle lines.

Illegal Curve has selected Pass It Forward as our charitable organization and we will donate $50 to them, either from Team Ezzy or Team Drew/Richy, depending on who is proven to be correct.

Pass It Forward was created in 2009, to help youth in Winnipeg who wish to play hockey but require help getting the necessary equipment. Each September they undertake a hockey equipment drive to help in this cause, in addition to accepting donations throughout the entire calendar year.

If you would like to throw your support behind a specific Illegal Curve team, join in on our charitable endeavour, and help support a worthwhile Winnipeg charity, e-mail Ezra or Drew and we will provide you with all of the relevant information.

Even if you aren’t able to donate, we encourage you to participate in this fun competition and pick a side. Volunteers are needed to be Ezzy’s personal alarm clock for Saturday morning (for team Ezzy members) or by lavishing him with copious amounts of alcohol on Friday night (for team Drew/Richy members.)

Who will prove victorious? You will have to tune to The Illegal Curve Hockey Show on TSN Radio Winnipeg, Saturday at 7:00 AM to find out.