Tim Stapleton is trying his hardest to make it back into the lineup and is returning home as the Jets travel to Chicago to face the Blackhawks.

Tim Stapleton has travelled the long road to the NHL. The undrafted college free agent out of University of Minnesota Duluth entered the league in 2008-09 after a successful stint in Finland with Jokerit (former club of Teemu Selanne). Listed at 5’9” Stapleton was able to use his speed take advantage of the international ice scoring 110 points in 111 games. 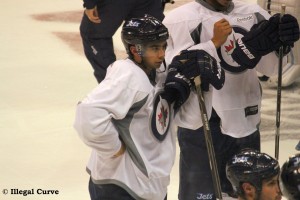 Currently, Stapleton is the 13th forward on the Jets, and is not letting it get him down

“I can’t really get down about it, I’m in the NHL, a lot of guys dream of just being here. (However) I’m not content with just being here, and I’m going to do everything I can to get in the lineup. I’m going to have a positive energy, work hard and see what happens.”

While with the Toronto Marlies (AHL Affiliate of the Toronto Maple Leafs) he was noted for his strong work ethic. Today was no exception as he was one of the last players off the ice in practice, appearing out of breath and drenched with sweat after stepping into the locker room.

“It’s just something I’ve always done, do a little extra, when you’re not playing in games, you’ve got to stay in game shape. Keep good habits, I work on shooting and things. Try to stay as sharp as I can just in case I get called in.”

Stapleton and the rest of the Jets are travelling to Chicago, for tomorrow night’s matchup against the Blackhawks. The game is being touted as a homecoming for Captain Andrew Ladd and defenseman Dustin Byfuglien who won the the Stanley Cup in 2010 with Chicago.

It is also a homecoming for the 29 year old Stapleton who was born in a suburb of Chicago. Naturally, the speedy forward would like to be in the lineup on Thursday night,  but is not about to ask the coach for a hometown discount.

“I’ll still buy a few tickets (for friends and family), not as many, I think I was originally going to by about twenty, but I think I’m down to five or six.”

While he won’t be playing on Thursday, Stapleton suited up for the AHL’s Chicago Wolves from 2009-2011 and is excited to return.

“It was the best, it was awesome, I had a lot of fun, a lot of friends and family got to see me play every night. It was fun to be home, I’m just excited to go back there.”

The Winnipeg Jets look for their first win against Jonathan Toews and the Chicago Blackhawks Thursday night on TSN National. Puck drop is at 7:30pm