Bisons’ Goalie skips class to fill in at Jets Practice

Winnipeg Jets netminder Chris Mason was out of town today to be with his wife for the birth of their child, putting the Jets in need of a goaltender for practice. Currently, there are only two goalies on the Jets roster, and anyone who has grown up playing minor hockey knows that having two goalies for practice is essential–paging Mr. Sieve.

In need of a goalie, Assistant GM and Director of Hockey Operations Craig Heisinger put out the call to Manitoba Bisons goalie Joe Caligiuri (brother of Jets Communications Coordinator Christina Caligiuri) to be the team’s second goaltender for practice today at MTS Centre.

The 22 year old certainly did not mind skipping his geography class to participate in practice with some of the best hockey players in the world. 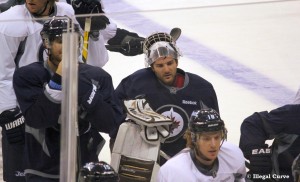 While every young Canadian boy’s dream is to play in the NHL, Caliguiri was greatful for the opportunity, stating that the experience was “a lot of fun”.

The Bisons’ puck stopper was recently the recipient of the CIS (Canadian Interuniversity Sport) “Athlete of the Week” after posting consecutive 2-0 shutouts against the Calgary Dinos.

Naturally, when stepping up to the professional level Caliguiri noted a few differences from his peers in the CIS

“Biggest thing is their releases, obviously their shots are harder but they get it off way quicker.  You have to be ready at all times. A couple times out there they completely caught me by surprise shooting the puck. (Another difference is) the size of the players, with traffic in front of the net, everyone is 6″2 to 6″5, it’s tough to see through bodies.”

Caliguiri noted that Jets’ forwards Andrew Ladd and Bryan Little got the best of him, but he also made a few saves on the big leaguers. 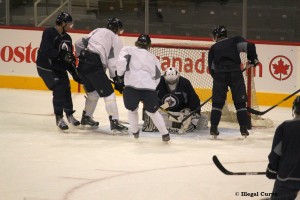 “Obviously if you’re in there long enough, a few are going to hit you,” said the modest backstop.

Chris Mason is expected to be back with the team on the team’s upcoming road trip to Chicago and Phoenix.

Mason’s dreams will come true with another member joining his family; in the meantime, however, his circumstances have made another boy’s dream come true.

It was a late night (early AM) post of the Jets game recap following the loss to the Flyers.

Is Bowness' criticism towards the Jets' defensive difference makers justified? How pivotal is Nikolaj Ehlers to the Winnipeg Jets' success?

Tanner Glass: “Dan Carcillo is a donkey”
The 13th Forward