More on the Jets Dustin Byfuglien. 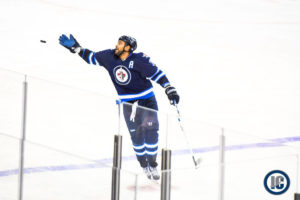 Time for Saturday Headlines and the Jets earned themselves a mention.  Host Ron MacLean was chatting with Chris Johnston and Elliotte Friedman and Friedman was asked about Jets defenceman Dustin Byfuglien.

Friedman spoke about Byfuglien earlier this week indicating that the talk was the Jets big man was leaning towards retirement but that the Jets had talked him out of it.

Tonight Friedman indicated he had spoken to Byfuglien’s agent Ben Hankinson who told Friedman “Look, don’t jump to any conclusions.”  With Hankinson also saying “this is not something that is going to end quickly. It’s going to play out over a little bit of time.”

Friedman added that the belief is the Jets are hoping that the urge will come back to Byfuglien once he sees the team playing.

He reiterated the point “Don’t jump to any conclusions.  And don’t expect necessarily any kind of quick announcement.”

You can watch it here.