The smooth skating D man was a late scratch. 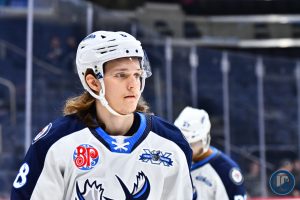 The Moose were set to play the Marlies in a Saturday afternoon re-match.  Sami Niku, who Manitoba coach Pascal Vincent felt was getting stronger and stronger in last night’s game, took warm up with the Moose and was listed on the roster for Manitoba.  He was seen stretching out (presumably his groin) during warm up skate and left the ice early.

Coach Vincent confirmed after the game that Sami Niku was pulled because of a lower-body injury. He indicated that Niku wanted to play and had pushed through it (i.e. playing last night’s game). Said it is just a matter of time, but nothing serious.

Moose stay in the fight with the Marlies but get edged out 3-2 by Toronto
Moose cannot keep pace with Toronto, losing 4-0